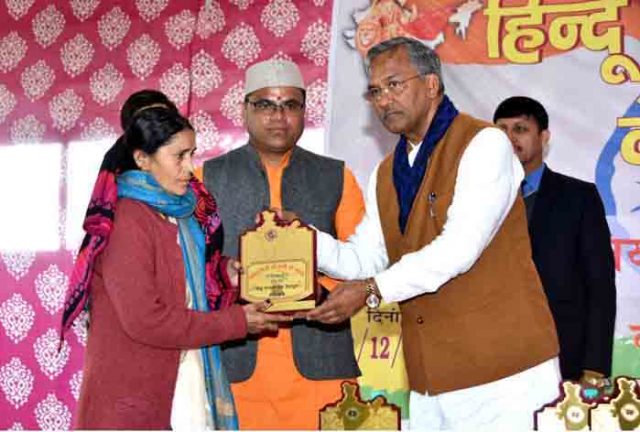 By OUR STAFF REPORTER
DEHRADUN, 23 Dec: Chief Minister Trivendra Singh Rawat has said that, in honour of the martyred soldiers, a grand Martyrs’ Memorial would soon be constructed in Dehradun. The state-of-the-art memorial will be equipped with all facilities, in which information about the martyrs would be digitally kept. The process of finding a suitable place for the memorial was on. The people of the country and the world would see how the young people of Devbhoomi Uttarakhand had contributed in the nation’s service. The memorial would inspire the youth to serve the country and be brave. He said that the Centre and the State Governments gave highest priority to the welfare and facilities of the soldiers. ‘One Rank One Pension’ was implemented by Prime Minister Modi and a commission set up to remove other pension discrepancies in the defence service. Soon, based on the commission’s report, the pension discrepancies would be removed.
It had been decided by the Government of Uttarakhand to give employment to dependants of the martyrs belonging to the Military and Para Military Forces, for which orders had been issued.
The Chief Minister honoured families of martyrs at a programme “Balidaano Ki Maati Ko Naman” organised by Hindu Jagran Manch in Jogiwala on Sunday.
A large number of soldier’s families and ex-servicemen were present on the occasion.