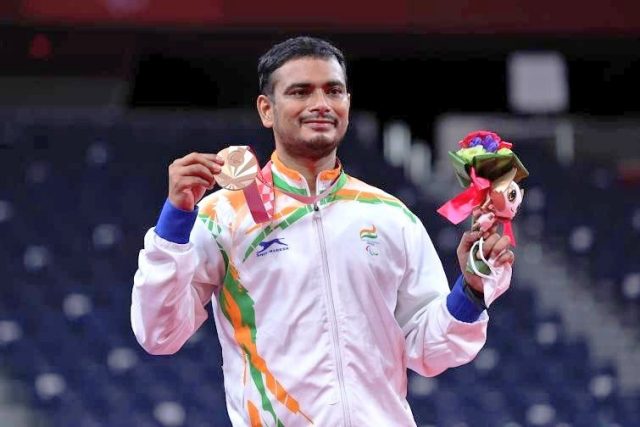 Dehradun, 5 Sep: Graphic Era has announced a cash prize of Rs 11 lakhs to another player from Uttarakhand for his outstanding performance in the Tokyo Paralympics. The latest announcement has been made for Manoj Sarkar, resident of Rudrapur, who won a bronze medal at the games.
This is the second recent instance of Graphic Era acknowledging a player who has brought laurels to the country after giving Rs 11 lakh to Vandana Katariya of Uttarakhand for her excellent performance in the Tokyo Olympics. Manoj Sarkar of Rudrapur, Terai, won a bronze medal by defeating Daisuke Fujihara of Japan, 22-20, 21-13, in 46 minutes, after beating UK player Daniel Bethel in Badminton.
Arjuna Awardee Manoj Sarkar is already associated with Graphic Era Deemed University. He is a Motivational Speaker Panelist in the Management Department of Graphic Era. Before going to Tokyo, Manoj Sarkar had delivered a keynote address at the Sports Conference of Graphic Era Deemed University on 24 August. Manoj left with a promise to the students that he would come to Graphic Era after winning a medal in the Paralympics.
President, Graphic Era Educational Group, Prof (Dr) Kamal Ghanshala, said that Vandana Katariya and Manoj Sarkar have brought laurels to Uttarakhand, India and the entire world. He said that the historic performance of the youth of Uttarakhand in the Olympics and Paralympics is testimony to the fact that there is no dearth of talent in the state. Uttarakhand can be made the highest medal winning state by giving good training to the youth in sports.

Garhwal Post has established itself as a credible, balanced and forward looking newspaper in India. Based in Uttarakhand, the daily is read by the aware, socially and culturally responsible, high-income elite of society.
Contact us: info@garhwalpost.in
legit dating id best hookup apps for women https://garhwalpost.in/skyrim-date/