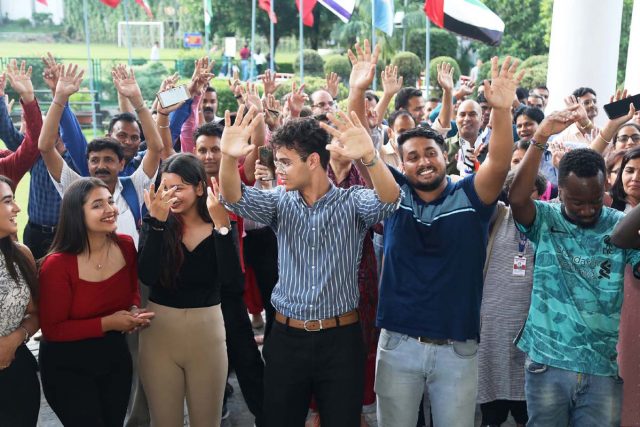 DEHRADUN, 8 Aug: Students and faculty members of Graphic Era Deemed University celebrated the victory of of eminent shuttler Lakshya Sen who has been associated with Graphic Era. He has bagged a gold medal in the Commonwealth Games 2022. Excited students danced for a long time as their beloved Lakshya won the singles gold in badminton at the Commonwealth Games. Sweets were distributed in the university campus in sheer joy.

The eyes of the students and faculty members were high on the men’s singles match as the country’s and Uttarakhand’s pride Lakshya Sen and Malaysia’s Tze Yong clashed in the Commonwealth Games today. As Lakshya Sen started marching towards victory from the second match of the set, celebrations erupted in the Graphic Era campus. After winning both the matches, Lakshya Sen won the gold medal and dancing and sweets distribution commenced in the university premises.

The students expressed their happiness by dancing for a long time in front of the B.Tech Auditorium. A few months back, in May, Lakshya Sen’s family had visited the same auditorium. Lakshya Sen, a member of the Badminton team that made India proud all over the world by winning the Thomas Cup, was accorded a warm welcome at the Graphic Era Deemed University. Graphic Era, apart from showering love on Lakshya, presented him an honorarium of Rs 11 lakh and announced a grant of Rs 10 lakh every year. He inaugurated the badminton court of the university and played a show match of badminton with Dr. Kamal Ghanshala, President Graphic Era Group of Institutions.

While addressing the function at Graphic Era, shuttler Lakshya Sen said that one should never stop believing in oneself and should always work towards fulfilling one’s dreams. Lakshya, said that Common Wealth, World Championship and then Olympics were his goals. Describing the respect and love received in Graphic Era as an inspiration to move forward, he said that it is such an honor coming from the tournament and receiving such a warm welcome. For this, he expressed his gratitude to Dr. Kamal Ghanshala, President Graphic Era Group of Institutions and his team.

Excited by Lakshya Sen’s victory, Dr. Kamal Ghanshala, President, Graphic Era Group of Institutions said that after getting associated with Graphic Era, Lakshya has completed the first part of his vision and has shown that he knows how to overcome challenges. . Now surely Lakshya will hoist the victory flag in the World Championship and Olympics and will increase the pride of Uttarakhand.

Addressing the students, faculties and parents gathered to celebrate the victory, Vice Chancellor- Dr Sanjay Jasola said that it is a matter of great pride for all and such moments of pride will come again and again, one after the other.

Garhwal Post has established itself as a credible, balanced and forward looking newspaper in India. Based in Uttarakhand, the daily is read by the aware, socially and culturally responsible, high-income elite of society.
Contact us: info@garhwalpost.in
actually free hookup sites good looking men over 50 date time today