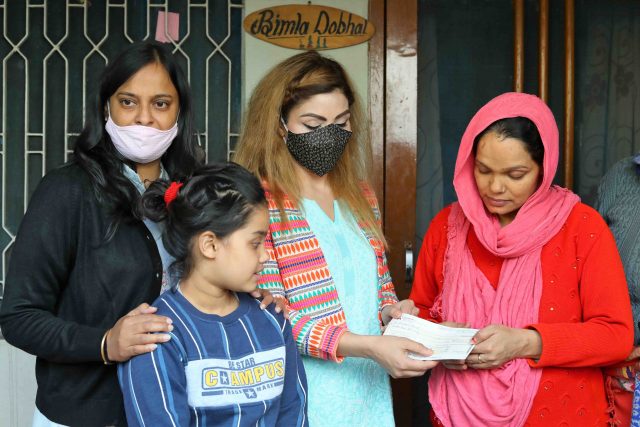 By Our Staff Reporter
Dehradun, 19 Nov: Graphic Era handed over Rs 10 lakh to the family of martyred BSF Sub-Inspector Rakesh Dobhal, who laid down his life recently in Baramulla. Senior official of Graphic Era Board of Management, Rakhee Ghanshala handed over the amount to the martyr’s family in Rishikesh.
Rakhee Ghanshala visited the family of the martyr, today, paid her homage and stated that, when the entire nation was celebrating Diwali, the brave hero of Uttarakhand, Rakesh Dobhal, laid down his life for the nation while bravely facing enemies in Baramulla. Along with the entire nation, Graphic Era family was in his debt. True homage to martyr Rakesh Dobhal would be that his family was not alone and would always stand with it.
Rakhee Ghanshala said that Ditya Dobhal, daughter of Rakesh Dobhal, and the soon to be born child would be given free education by Graphic Era from primary till higher education. A letter from Graphic Era for the educational arrangements of the martyr’s children along with the cheque was given to Santoshi Dobhal, wife of the martyr. The letter stated that the children of the martyr could pursue Engineering, Management, Computer Application or any course from Graphic Era Deemed University and Graphic Era Hill University without any educational cost. Graphic Era Global School would provide the basic education.
Rs 5 lakh was handed over by Graphic Era Deemed University and Rs 5 lakh by Graphic Era Hill University. Paying his homage to the martyr, President, Graphic Era Group, Prof (Dr) Kamal Ghanshala said that Graphic Era with all is commitment would stand strongly with the martyr’s family. Before this, Graphic Era had initiated free education for the Pulwama Martyrs’ families. Along with this, concessions are being given to children coming from defence background in Graphic Era.
Present on this occasion were Registrar, Graphic Era Deemed University, Dr Deepali Bansal, Prof (Dr) Subhash Gupta and Assistant Registrar Anil Chauhan.