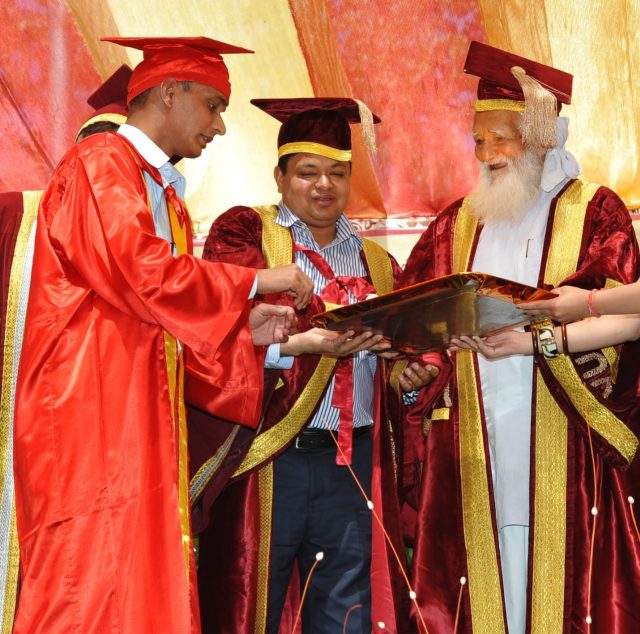 By Our Staff Reporter
Dehradun, 22 May: Padma Vibhushan, Sunderlal Bahuguna, who gave the message of loving trees and environment to the whole world, through his legendary Chipko movement against deforestation, believed that history is created only by those, who swim against the tide. He had given this message to the young generation in Graphic Era. President, Graphic Era Group, Prof. (Dr.) Kamal Ghanshala paid homage to Padma Vibhushan Bahuguna, saying that the world has lost a legendary environmentalist, who raised his voice for preserving the environment globally.
Environmentalist Padma Vibhushan Sunderlal Bahuguna was awarded an honorary degree of Doctor of Science on April 17, 2012 by Graphic Era Deemed University for his outstanding contribution in the field of environment. While addressing young pass-outs, who were conferred  degrees in Engineering, Management and other professional courses in the Graphic Era auditorium, Dr. Sunderlal Bahuguna gave them the mantra for success in life.
Thousands of youth still remember that memorable speech of Dr. Bahuguna. Dr. Bahuguna, had in his address said that success is achieved by only those who swim against the tide. By their work, such people can bring big changes in  society. People, who choose to flow with the stream, however, cannot do this work. Therefore it is necessary to swim against the flow changing a system. Only those who do this, create history.
He had called upon the youth to not get entirely lost in the dazzle of big cities and said that for the development of a country, it is very important that the youth move towards cities as well as towards the villages equally. Dr. Bahuguna’s message was not merely jugglery of words, but something that he had himself practiced in his life.
President, Graphic Era Educational Group, Dr. Kamal Ghanshala, while expressing his condolences on the death of  Bahuguna, said that he had himself chosen the path of struggle by shunning all comforts and facilities and had spread the message of environmental conservation in the entire world. Till the last years of his life, he kept making people aware about conservation and preservation of environment. His death is a great loss to the whole world. He will continue to live amidst us through his views and virtues.