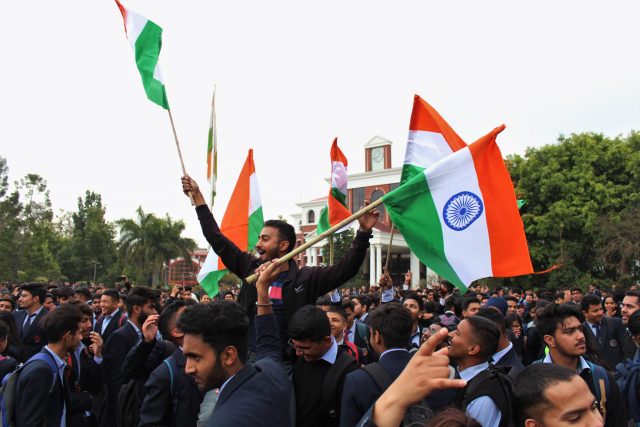 By OUR STAFF REPORTER
DEHRADUN, 26 Feb: Thousands of students of Graphic Era celebrated the air attack by Indian Air Force on terrorist camps in Pakistan. Though not politically involved, these students rejoiced in the university premises by dancing and raising slogans against Pakistan and expressing their happiness. Students of Graphic Era deemed University and Graphic Era Hill University gathered around the national flag and shouted slogans like ‘Pakistan Murdabad’ and ‘Hindustan Zindabad’ and danced to the beats of the dhol.
Students applauded the attack by the IAF and said that this was the right step at the right time. The students took several rounds of the university premises. Several students were seen doing push-ups to express their happiness and enthusiasm. They were of the opinion that the attack on terrorist groups was a first step towards victory. They said that groups supporting terrorists should very well understand that India will avenge each and every martyr. This was just a beginning and not the end.
Dr Amal Shankar Shukla, Dr Shubash Gupta, Dr Ajay Kumar, Anil Chauhan, BK Kaul, Aditya Agnihotri, Madhukar Bansal and other officials were present during the celebrations.

Garhwal Post has established itself as a credible, balanced and forward looking newspaper in India. Based in Uttarakhand, the daily is read by the aware, socially and culturally responsible, high-income elite of society.
Contact us: info@garhwalpost.in
list of local dating sites https://garhwalpost.in/date-night-plans/