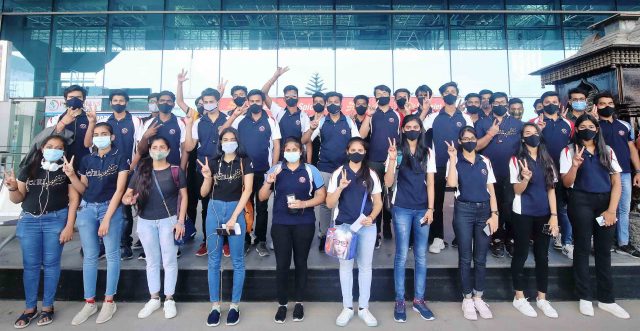 By Our Staff Reporter
Dehradun, 21 Apr: Amid the second wave of Covid in country, the process of sending students from Graphic Era to their homes by air continued on the third day, here, today. Today, students from Bihar were sent to their homes by air and, by evening, they had reached their homes safely.
Graphic Era took this initiative after the state government’s decision to call off offline classes. Today, a total of 34 students from Bihar were sent to Patna by air from Dehradun. Earlier, in the last two days, students from Andhra Pradesh, Assam, West Bengal, Maharashtra, Chhattisgarh, Karnataka, Varanasi and Lucknow were similarly sent home. All these students were staying in the hostels of Graphic Era Deemed University and Graphic Era Hill University, here.
Parents of the students have welcomed this initiative. A student of GEHU, Aditi Pathak from Patna, said she was going home by air, the safest mode of transport amid the Corona pandemic. Aditi added that her parents were very worried and were not in a position to come here. The Graphic Era has won several hearts.
A student of Graphic Era Deemed University, Ujjwal Anand (Patna), said this was an unprecedented move by a university. This had relieved the parents’ worries.
For many students, this was the maiden flight of their lives. Several students from Delhi also left today.
With the closure of offline classes, the students were given the option of staying in the hostels or going home. Those opting to leave have been flown home. Students from Moradabad, Delhi, Meerut, Muzaffarnagar, Haldwani, Kashipur, Bijnor, Saharanpur, etc., have been sent by buses and cars. University officials were sent to accompany them.
President, Graphic Era Group, Prof (Dr) Kamal Ghansala said that the students are members of the Graphic Era family and keeping them safe is the first priority.