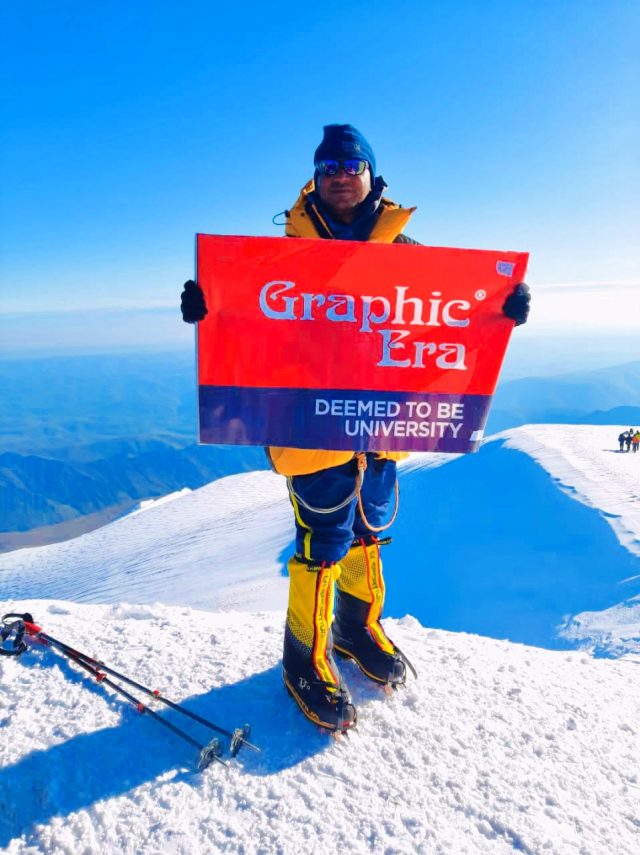 By Our Staff Reporter
Dehradun, 19 Aug: Graphic Era’s flag was hoisted on Mount Elbrus, the highest peak in Europe. SDRF Jawan Rajendra Singh Nath hoisted the flag of Graphic Era on this 5642 metres high snow-capped mountain peak.
This is another proud leap for Graphic Era, which has made its mark in BTech placements with this year’s highest package of Rs 54.80 lakh per annum. On 17 August, at 6.25 a.m. European time (IST- 8:55 a.m.), SDRF constable Rajendra Singh Nath successfully scaled Mount Elbrus and unfurled the flag of Graphic Era on the top of the peak. It is for the first time that Indian and Uttarakhand flags were also hoisted on this mountain peak.
Mountaineer Rajendra Singh Nath has set a record by conquering Europe’s highest peak twice in a span of six days. Nath was one among a three member team sent for the first Indian police double summit terrecord. He was sent for this operation from the base camp at midnight of 16 August. While expressing his gratitude to Graphic Era for its cooperation in this expedition, he said this was the first time a new record has been set by a policeman by successfully ascending Mount Elbrus twice.
Graphic Era had recently felicitated Indian women’s hockey team player Vandana Kataria, resident of Haridwar, for her historic performance in the Olympics. The university also presented her an award of Rs 11 lakh. She was also warmly welcomed in the university campus.
Congratulating mountaineer Rajendra Singh Nath on this great achievement, Prof (Dr) Kamal Ghanshala, President, Graphic Era Group, said that there is no dearth of talent in Uttarakhand. If given high level training, the youth of this state can make the country and Uttarakhand proud at the world level.