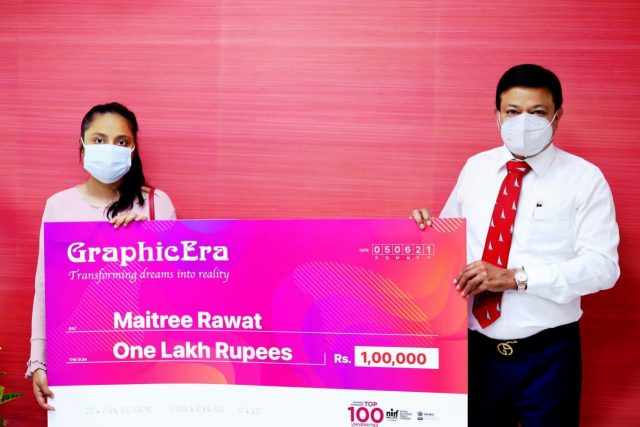 By Our Staff Reporter
Dehradun, June 5: Amid bad news about Corona coming from all around the world, Graphic Era has once again done something that will bring smiles on your faces. When jobs of millions of people across the globe are at risk due to the Corona pandemic, Graphic Era is setting new records of success one after the other. One of the students of Graphic Era has given new hopes to the education world by getting placed in the world’s leading company, Google.
Google has offered placement to Maitree Rawat, a resident of Dehradun, on a package of Rs 54.80 lakh. Maitree has done B.Tech in Computer Science from Graphic Era Deemed University. After clearing coding tests, Maitree went through several rounds of interviews in the final year of B.Tech for placement in Google. Google has now announced her placement as software engineer in the company. Maitree’s father,  Mohan Singh Rawat is an ex Indian Air Force official and presently works in a bank. He lives in Mohkampur.
Before getting placed in Google, Maitree was selected in reputed companies like Cognizant, Capgemini, TCS and Infosys during their placement drives in the university. Maitree credited her success to Graphic Era’s high quality education, Chairman of Graphic Era Group, Dr. Kamal Ghanshala, who himself takes classes of students and to her parents.
Maitree, her father and mother Deepika Rawat were felicitated at Graphic Era Deemed University today, after her placement in Google. Dr. Kamal Ghanshala wished Maitree luck for her bright future and presented her a cheque of Rs. 1 lakh. Dr. Ghanshala said that world’s latest technologies, teaching systems, world class faculties and laboratories have made Graphic Era a university that transforms dreams of the youth into reality.
Earlier, Microsoft had last week selected Deepak Singh Rautela, a B.Tech computer science student of Graphic Era, for placement at a package of Rs 40.37 lakh per annum. The success of Graphic Era Deemed University and Graphic Era Hill University students, who have made placement records during the lockdown, has given new hope to the country.