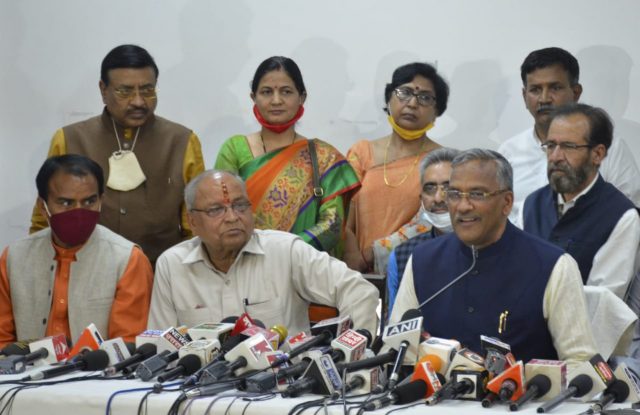 Dehradun, 9 Mar: Trivendra Singh Rawat who resigned today said he was grateful to the BJP for having given him the opportunity to serve Uttarakhand as its chief minister for nine days short of four years. Addressing a press conference at his official residence after returning from Raj Bhawan after submitting his resignation, he said he was fortunate to have served Uttarakhand and the BJP for over thirty years. He added that he did his best to serve the people of Uttarakhand as CM in these four years. He was grateful also to the people of Uttarakhand for having provided him the opportunity to serve them.
Reacting to the queries of media person, he said he had never dreamt of becoming the chief minister as he was born in a distant village in Garhwal and it was only the BJP that provided him the opportunity to serve the party and the state in various capacities. He wished his successor well and promised to offer his fullest cooperation. He confirmed that the legislative party meeting would be held in Doon at 10 a.m., tomorrow.
The press conference lasted less than 3 minutes and during this time he tried his best to appear calm.
Chief Secretary Om Prakash also called on him before he left for Raj Bhawan to submit his resignation.
Meanwhile, the Governor has declared that Trivendra Singh Rawat would continue as interim CM till a new Chief Minister is appointed.