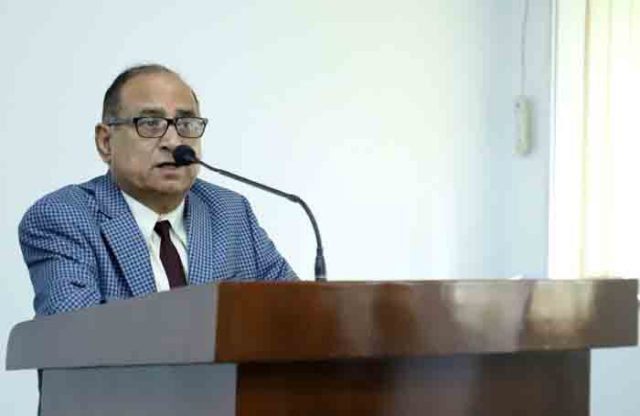 DEHRADUN, 24 Sep: Justice Rajesh Tandon, Chairman of the Uttarakhand Law Commission, said today that, to make gender sensitisation a success, it was necessary to make women aware of the special laws made for them, as well as sensitise men on the subject. Justice Tandon was speaking at a lecture series organised on the subject of Gender Sensitisation at Graphic Era Deemed University, today. The Department of Humanities and Social Sciences of the University organised this lecture series under the aegis of the Gender Anti-Discrimination Cell. Justice Tandon said that, under Article 15 of the Indian Constitution, it is an offence to discriminate against any woman. Along with this, certain privileges for women have also been ensured in the constitution. Gender sensitisation required that women be made aware of these privileges. He said the laws which needed to be more focused on were ‘The Prohibition of Child Marriage Act’, ‘Special Marriages Act’, ‘Maternity Benefit Act’, ‘Medical Termination of Pregnancy Act’, ‘Sexual Harassment of Women at Workplace Act’, ‘Equal Remuneration Act’, ‘Indecent Representation of Women (Prevention) Act, etc. Vice Chancellor of Graphic Era deemed University Dr RK Sharma said that the reason for Global Gender Inequality was the mentality that believed “Women are weak”. In order to have successful Gender Sensitisation in society, there was need to erase the negative mindsets of the people. The programme was attended by Pro-Vice Chancellor Prof Dr HN Nagaraja and students of the departments of hotel management, law and management. The programme was conducted by Prof Dr RK Dhar, President, Gender Sensitisation Cell, Graphic Era Deemed University.