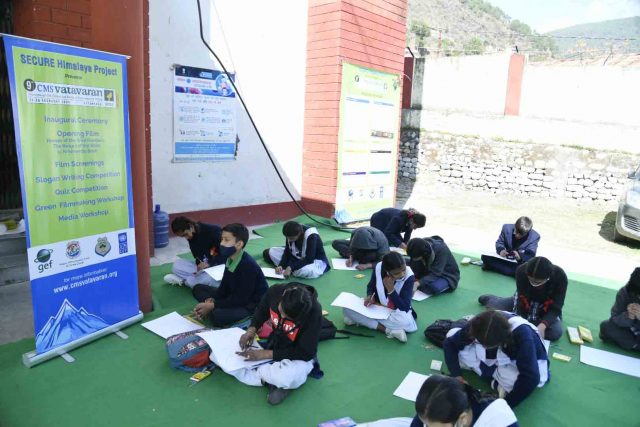 By Our Staff Reporter
Uttarkashi, 25 Feb: Inaugurating the two-day green film festival at the District Collectorate Auditorium, here, District Magistrate Mayur Dixit congratulated the organisers SECURE Himalaya Project of UNDP and CMS VATAVARAN. He called for all students and teachers present to take forward the ideas and lessons learned from the award winning environment and wildlife films in the festival. He reminded the audience that “Uttarkaahi is the only district with more than 80% forest area and that too in the fragile Himalayan region. Therefore, it is each ones responsibility to help preserve and conserve this heritage.”
This unique green film festival and forum is open for the public on 25 and 26 February. This is being organised by the Secure Himalaya project of UNDP with support from the Uttarakhand Government and Union Ministry of Environment, Forest & Climate Change (MOEFCC), and CMS Vatavaran. This is part of a series of the ‘9th CMS Vatavaran Travelling Film Festival and Forum’ in four Himalayan cites of Uttarkashi, Gangtok, Shimla and Leh. The idea behind this festival and forum is to support this unique green movement for conservation through using films, festivals and forums; and also to reach out and engage with a cross section of stakeholders, including Government of India, Media, Conservation organisations, Experts, Academics, Corporations, Youth and general public.
The inauguration ceremony also included the first ever public premiere of the film, “Heroes of the Wild Frontiers: The Return of the Shan”, by Award winning film maker Krishnendu Bose. This film is about the Snow Leopard and its habitat in Leh.
The inauguration was followed by screening of shortlisted films for various audiences like students, teachers and the general public. Students also participated in the on the spot quiz competition on environmental issues and drawing/painting competitions. Eminent media professionals from Uttarkashi also participated in a media seminar to discuss on their reportage on climate change in specific and environment and how in general it could be made more impactful.
The festival will continue tomorrow with the screenings of Nominated/Awarded films on various environment and wildlife issues at multiple venues in the city, including at the Collectorate Auditorium, GPG College, Kendriya Vidhyala, Nehru Institute of Mountaineering and ITBP. Competitions for children will also be held along with a Workshop on Green Film Making by eminent film maker Anoop Khajuria. 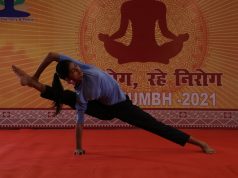