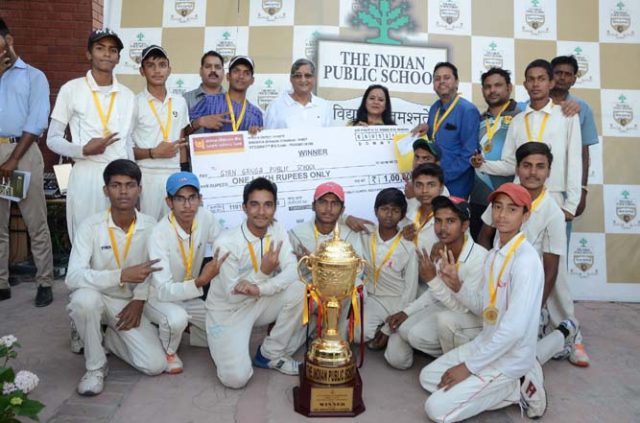 By OUR STAFF REPORTER
Dehradun, 9 May: Gyan Ganga Public School of Buxar won the 14th SP Sinha Memorial Under-15 Boys National T-20 Cricket Tournament held at The Indian Public School, here. Gyan Ganga lifted the trophy by beating Red Crescent Public School of Ranchi by 3 runs. Earlier, Red Crescent won the toss and elected to field first. Batting first, Gyan Ganga team got all out in 19.4 overs, but put up a handsome total of 172 runs on the score board.
Chasing the mammoth target, Red Crescent could score only 169 in the stipulated 20 overs at the loss of four wickets.
Yashasvi Shukla of Gyan Ganga Public School was adjudged Man of the Match for taking 3 wickets. Kasif Ansari of Gyan Ganga was given the Player of the Tournament Award. The Gyan Ganga Public School received the winning cheque and Gold Medal while Red Crescent received the Silver Medal along with the cheque for runner up.
The winning team received prize money of Rs 1,00,000, while the runner up got Rs 50,000. The second runner up of the tournament, Green Valley School of Ghaziabad, also received prize money of Rs 25,000, while the fourth place prize money was awarded to GS Residential School of Sasaram. Besides these, 72 individual prizes ranging from Rs 500 to Rs 1,00,000 were given out to the participants based on their performance.
RK Sinha, Rajya Sabha MP and the Chief Guest at the event, said after the prize distribution, “Besides academics, sports is the one medium that helps in shaping young minds. Sports not only teaches discipline but fosters a sense of teamwork, thus helping in building leadership skills. The SP Sinha Memorial Under-15 Boys National Cricket Tournament has been instituted with the aim of keeping these youngsters active and healthy so that they can be the pillars of nation building in the future. At this time, when smartphones have overshadowed these young brains, the enthusiasm of these youngsters makes us more determined to continue with such endeavours.”
He disclosed, “The tournament has given national players like Rishabh Pant, Ishan Kisan, Kunal Chandela, Prabh Simran Singh and Zeeshan Ansari.”
“A total of 32 teams from across India participated in the event. Tournaments like this help in the overall development of the students by teaching lessons like discipline, responsibility, self-confidence and also have many health benefits,” said Sanjeev Kumar Sinha, Principal, The Indian Public School.
Rishabh Pant’s mother, Saroj Pant, was also present at the final match as one of the guests. 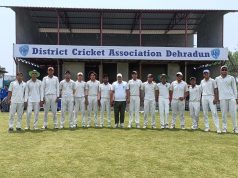