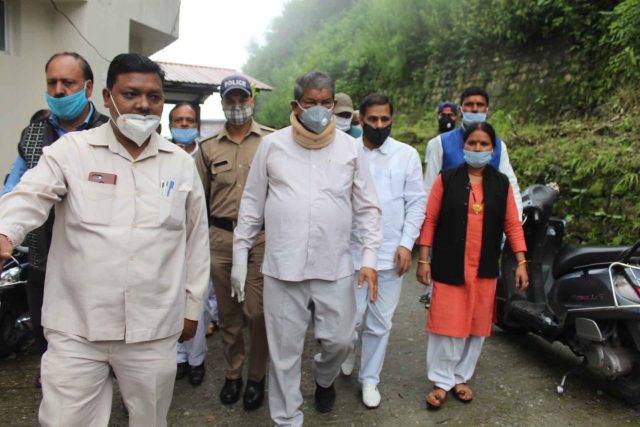 By Our Staff Reporter
Mussoorie, 2 Aug: Former Chief Minister Harish Rawat accused incumbent CM Trivendra Singh Rawat of not taking concrete action to deal with the rain related disasters at a press conference held, here, today. He said that the present scenario in Dharchula and Munsiyari was worse than bad. He said that during these trying times, large scale transfers of district magistrates had been done, which revealed the manner in which the government was functioning. There was need to work in a planned way to deal with the disaster. He said that due to the government’s indifference, MLA Harish Dhami had also threatened to resign from the legislature for the benefit of his people. The way Harish Dhami was serving his people, if he resigned the work would come to a halt.
Harish Rawat said it was a good thing that the foundation of the Ramjanmabhoomi temple was being laid in Ayodhya on 5 August. He expressed the hope that there would be public welfare in the name of Ram and not politics. Harish Rawat alleged that the BJP leader was doing vote politics by talking in contradictions. He asked if during the BJP’s tenure employment had been provided to the youth of the country, or terrorism been eliminated; whether poverty had been reduced. He accused the Central Government and BJP leaders of misleading the people of the country.