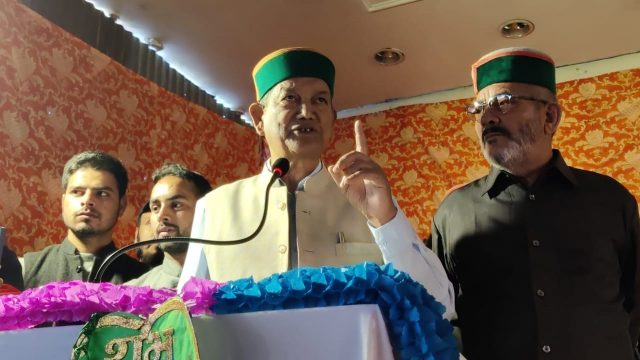 By Our Staff Reporter
Mussoorie, 29 Oct: Former Chief Minister Harish Rawat and State Congress President Ganesh Godiyal were the chief guests at a Congress Diwali Sneh Milan held here today. They were welcomed warmly by Congress workers, which included Mussoorie President Gaurav Agarwal and former MLA Jot Singh Gunsola. Harish Rawat and Ganesh Godiyal gave the victory mantra to the Congress workers for 2022. They asked the workers to unite, project Congress policies and the failed governance of BJP in their respective areas.
They attacked the Pushkar Singh Dhami Government of the state, alleging that Chief Minister Pushkar Singh Dhami was a puppet in the hands of the mining mafia.
Godiyal said that the government had failed to deal with the recent natural disaster. Help had not been provided to disaster victims. He alleged that the Chief Minister was insulting disaster victims and indulging only in politics. The BJP central leaders were coming only as political tourists to the state. He said the Centre should stop tricking the people of Uttarakhand and serve them, instead.
Harish Rawat said that promptness at the time of disaster is of great importance. He alleged that BJP ministers and MLAs themselves were saying that the Chief Minister is visible only where the helicopter is. BJP workers had even gheraoed a Union Minister. He warned the government that, if the disaster victims did not get help soon, he would stage a sit-in protest.
Present on the occasion were former MLA Jot Singh Gunsola, former MLA Rajkumar, Lalchand Sharma, Manamohan Singh Malla, Jasbir Kaur, Godavari Thapli, Pratap Panwar, Darshan Rawat, Vinod Semwal, Satish Dhoundiyal, Megh Singh Kandari, Wasim Khan, Rajiv Agarwal, Arvind Sonkar, Kuldeep Rawat, Gaurav Gupta, Amit Gupta, Rajiv Rawat, members Sarita Kohli, Sarita Panwar, Jasoda Sharma and others.