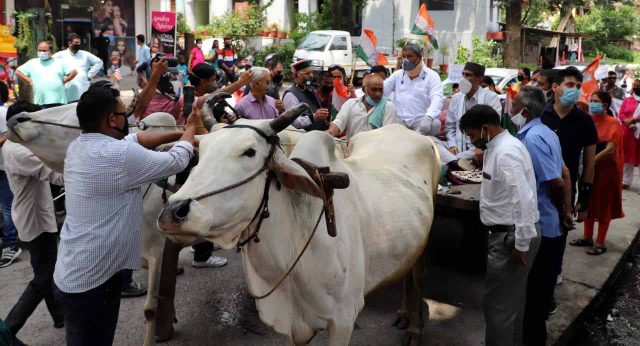 DEHRADUN, 29 Jun: Congress workers led by former Chief Minister Harish Rawat staged a protest here, today, against the high prices of petrol and diesel. During the protest, the former Chief Minister and currently Congress General Secretary rode a bullock cart up to the Shiv Temple in Raipur.
At the temple, he offered worship and prayed for grant of ‘wisdom to the Modi Government’. Rawat drove up at 10 a.m. on Monday to the main gates of the Ordnance Factory on Raipur Road, where he sat in the bullock cart waiting for him at the spot and then rode it up to the Shiv Mandir. This was not an official programme of the State Congress and hardly any PCC office bearer was present in the “Bailgadi Yatra”, but party leaders from the Harish Rawat camp were present in good numbers.
Those present included Prabhulal Bahuguna, who had contested from Raipur against the BJP candidate Umesh Sharma ‘Kau’ and lost; close confidante of Rawat, Surendra Kumar, who also happened to save a drowning dog from the nearby canal even as Rawat was busy offering prayers at the temple.
Later, speaking to the media informally, Rawat said that while the prices of crude oil were coming down in the whole world, the Union Government had increased the prices of petrol, diesel and LPG more than a dozen times, which had raised the transportation costs of all the commodities needlessly. The high price of diesel would prove fatal to farming and agro production. He also alleged that due to the increase in the prices of petroleum products, the prices of essential commodities had also increased tremendously. This added to the Corona led crisis had further ruined the already shattered economy of the country. Business and farming were already going through a crisis phase due to the recession. He added that inflation had broken the back of the common man and therefore he had to reach out to Bhole Baba (Shiva) and pray at his feet seeking wisdom for those running the Union Government! He further claimed that he also prayed to God for early eradication of the Corona pandemic from the world!
Former Chief Minister Harish Rawat also laid a wreath before the statue of Maharana Pratap after taking a round of the Maharana Pratap Chowk en route to the Shiva temple. The activists moving along with him kept raising slogans against the Centre and the state government. Among those present were Prabhulal Bahuguna, Jot Singh Bisht, Puran Rawat, Asha Manorama Dobriyal Sharma, Hema Purohit, Kamlesh Raman, Municipal Corporators Hukam Singh Gadia and Anil Chhetri, Rajesh Sharma, Anil Negi, Abhay Ghani, Ajay Dobhal, Kavita Lingwal , Sarita Bisht, Jyoti Devi, Suleman Ali, Sangeeta Rawat, Pratima Sharma and Sunita Gurung.