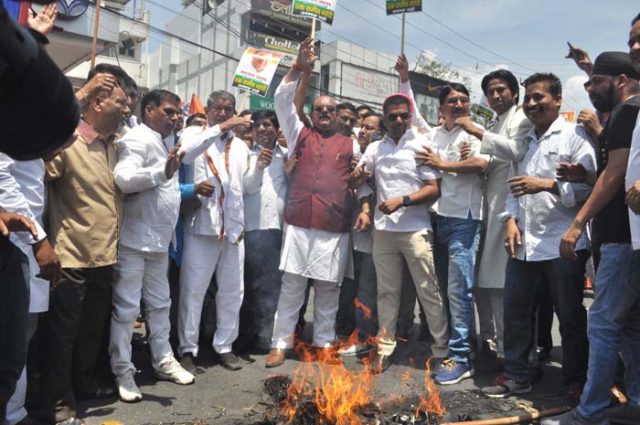 Dehradun, 13 May (IANS): Congress General Secretary and former Chief Minister Harish Rawat on Monday observed an hour-long fast here in protest against the recent death of a Dalit youth in Tehri district of Uttarakhand.
Rawat, along with his supporters, sat in front of a statue of Mahatma Gandhi at a park here, saying he thinks good sense will prevail upon the BJP government in the state through his “Maun Vrat”.
“Such heinous anti-Dalit incidents must end in the state,” said Rawat.
Jitendra Das, 23, a Dalit, was allegedly beaten up by upper caste men in Tehri district recently for eating in front of them while sitting in a chair.
The next day, when Das’ health deteriorated he was rushed to a Dehradun hospital where he died on 5 May.
Later, Rawat along with Pradesh Congress Committee chief Pritam Singh and a large number of Congress workers also burnt an effigy of Prime Minister Narendra Modi for his comments against the late Rajiv Gandhi.

Garhwal Post has established itself as a credible, balanced and forward looking newspaper in India. Based in Uttarakhand, the daily is read by the aware, socially and culturally responsible, high-income elite of society.
Contact us: info@garhwalpost.in
https://garhwalpost.in/dating-a-recently-widowed-man/ https://garhwalpost.in/ladies-searching-for-serious-relationship/