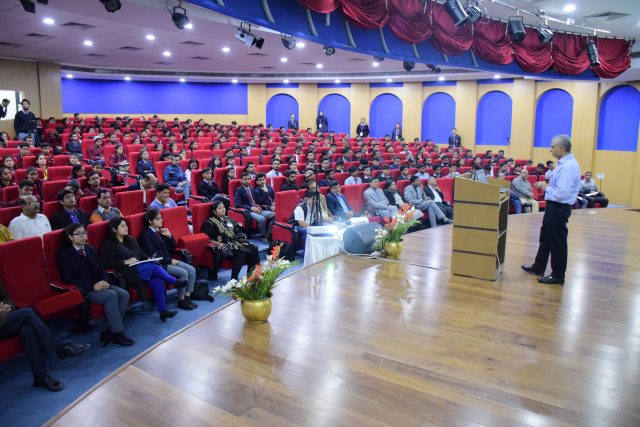 Dehradun, 15 Nov: Soon, the excess amount produced during the process of making heavy water will be used in the near future for the treatment of cancer patients. On the third day of a workshop underway at Graphic Era Hill University, here, while addressing the students, Director, Central Board of Heavy Water, Dr VK Khilnaney said that for the treatment of lung cancer and breast cancer, deuterium depleted water produced after manufacturing of heavy water would be used and this research is going on at the Tata Memorial Hospital.

The three day workshop is being conducted by the Department of Physics, GEHU, in association with the Department of Atomic Energy of the Government of India. Dr Khilnaney said that heavy water, which is used as a coolant and neutron moderator in nuclear reactors, is produced by removing the hydrogen isotope, deuterium, from ordinary water. In Russia and Japan, the remaining deuterium free water is given in a balanced way to the patients after chemotherapy. Experts from Tata Memorial Hospital are conducting research on deuterium depleted water for treatment of breast cancer and lung cancer and success is expected soon.

He added that deuterium is a magic isotope which could be added in the composition of drugs used for treatment of general diseases and it would also fight the dangerous after-effects. All over the world, Deuterioated drugs were being utilised to treat diseases like diabetes, Alzheimer, spasticity, etc.

Dr Amar Bannerjee of Bhabha Atomic Research Centre spoke about the various techniques evolved from atomic energy production that were helping to improve the lifestyle of the common man. He also spoke about various career opportunities in BARC.

Scientist of the Radiological Safety Division of the Atomic Energy Regulatory Board, Dr Pankaj Tandon gave a presentation on regulatory requirements and radiation safety aspects.

Vice Chancellor Prof (Dr) Sanjay Jasola said that the three day workshop was an achievement for the university.

Garhwal Post has established itself as a credible, balanced and forward looking newspaper in India. Based in Uttarakhand, the daily is read by the aware, socially and culturally responsible, high-income elite of society.
Contact us: info@garhwalpost.in
dating profile for love island