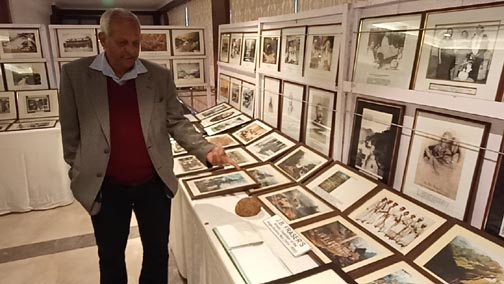 By OUR STAFF REPORTER
Mussoorie, 31 Mar: Historian Gopal Bhardwaj is very anxious about more than 200 year old historic and antique material related to Mussoorie and nearby areas which has been preserved by him. This is because the government and administration are not taking any action to preserve it.
He said he had been demanding for a long time the state government and district administration take action on preserving the material. Being old, now, he was unable to handle the material and also lacked space. It was presently being kept inside a tin shed. Gopal said that he had urged officials of the Mussoorie Municipal Council, State Government and District Administration to establishe a museum in Mussoorie so that all such important documents and material could be showcased there. After the formation of the Museum, tourists coming from all over the world and the young generation would be able to know the 200 year old history of Mussoorie and nearby areas. The government’s disregard made him very unhappy and he was worried about who would take care of the artifacts in the future.