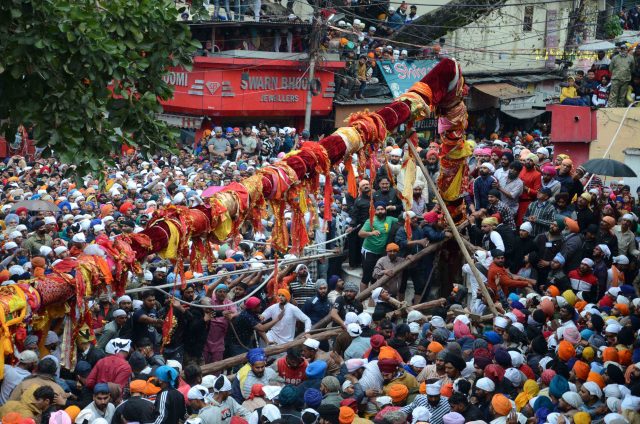 DEHRADUN, 13 Mar: The holy flagpole, the Jhandeji, at the Guru Ram Rai Darbar, snapped and fell on the large crowd of devotees while being hoisted on the inaugural day of the Jhanda Mela, today, injuring several persons. The accident occurred when the pole of the flag, known as Jhandeji by the devotees was being raised on the inaugural day of the famous Jhanda Mela here. The injured were immediately taken by ambulances present to hospital. Fortunately, however, there was no stampede during following this accident.

The historic 105 feet high flag was being mounted in the Darbar Sahib today and it was raining heavily. During the mounting procedure, the wooden scissors which held the mast up slipped, probably due to the rain and, as a result, the mast came down and fell on the devotees. The devotees, who were gathered in large number and raising the flagpole, were injured as a result and had to be admitted to a local hospital. Mahant Devendra Dass, Head of the Guru Ram Rai Mission, was present during the incident. Earlier in the morning, the earlier flag had been brought down, and the new one, bathed with curd and Gangajal, was being raised in the evening by the devotees. Today was the first day of the month long historic Jhanda Mela of Dehradun. However, the Sangat did not give up and after paring the broken part, it was successfully raised under the leadership of Mahant Devendra Dass, marking the beginning of the month long celebrations.