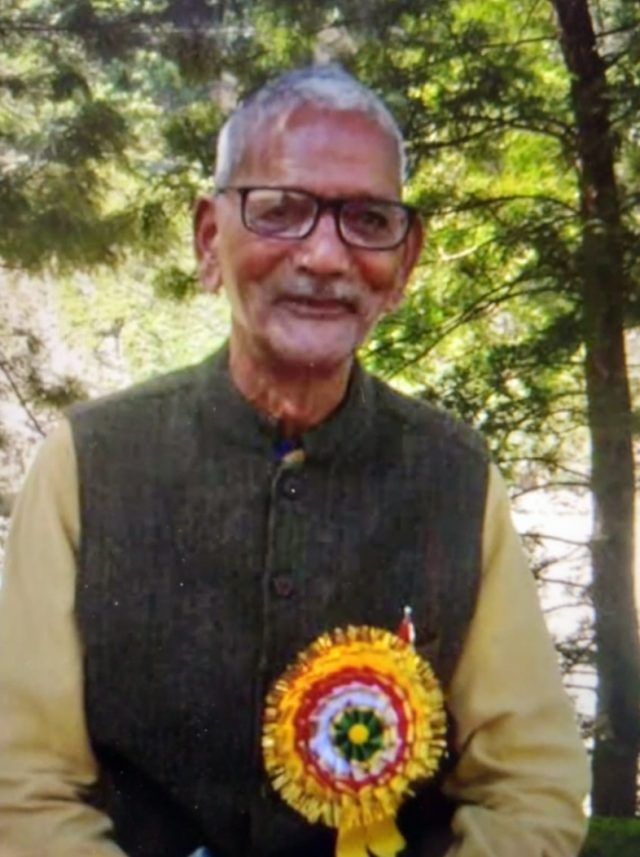 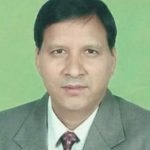 Pushkar Singh Kandari, the founding Principal of Kherakhal Inter college, now in Rudraprayag district, left his corporal frame quietly in Delhi in the midst of his family a few days back. He was born in village Kamsal in Agastyamuni block of Rudraprayah district in 1929. He was over 90 years yet mentally fit and agile . A pall of gloom hangs on his students whom he groomed and taught over years. He was the first principal of Kherakhal, a private High School set up by the people of the adjoining Gram Sabhas of Nawasu, Bangoli, Musoli and aided and supported by the hinterland Gram Sabhas of Patti Bacchansyun and Patti Chalansyun. Later, under his pioneering principalship, Kherakhal became an Inter College. In the early sixties of the nineteenth century, it had barely five rooms and as it grew into High School and later into an Intermediate College, Principal Kandari with the support and guidance of the management committee, lent his charismatic touch to the building of expanded infrastructure, so direly needed for running High School and Intermediate classes. He earmarked one class for joyful labour and learning especially for the horticultural activities by the students. A big orchard was developed and on ripening, fruits were shared with the students. Each class by rotation collected boulders from the nearby rocks for the school building. Shramdaans were organized and the students, particularly of the High School and the Intermediate went to the jungle to bring huge pine and oak trunks for the college roofs.

Located on the top of a ridge of the mountain that forms roughly the boundary between Bacchansyun and Chalansyun, it was an arduous task to bring furniture, tin sheds and sand and cement from the nearest road head Khankara, some 12 KMs away. It was a steep and tortuous climb but as students we were so inspired and imbued with indefatigable energy that we brought all the material on our heads from Khankara to Kherakhal.

Those days even radio was a luxury and one Hindi weekly from Kotdwara was available in the reading room of the college. But the Principal devised a routine which was rigorously followed. Duty was assigned to a teacher to write every day the main national and international news on the blackboard. The day started with the usual prayer, followed by roll call of students by their class teacher. Then the Principal would ask at random students, one by one, beginning from smaller classes to tell the news (s)he has read and then come to higher classes. Those who could not tell the news were reprimanded and asked questions the following day. Then followed a discourse everyday on national, international and moral aspects of education, followed by collective PT by the students. I distinctively recall his long commentaries during the war of liberation of Bangladesh, the mounting burden of refugees on India, the arrival of 7th US Fleet in the Bay of Bengal, signing of Indo-Soviet Treaty of friendship and eventual liberation and the birth of Bangladesh. He ignited the young minds and kindled the fire of patriotism in every student. The Chaukhamba mountain range just in front of us stood a solemn witness.

He was a hard disciplinarian. He would keep a watch on late comers and those not wearing the uniform. No student could be absent without his prior written permission unless it was a compelling unforeseen circumstance. He was feared and revered for strict discipline both by the teachers, students and the staff. He would take sudden round of the college to see that classes are running well and that no student is playing truant. He treated the elderly lower grade staff with proper dignity. During winters, the classes were held in the open but he had instructions that there should be reasonable distance so that all classes run uninterrupted. Once, during a sudden visit he found that two classes were seated close by, and he questioned one teacher. The teacher gave some reply while seated. The infuriated Principal said, ‘This is no manner’. The teacher at once realised his folly and stood up and apologized for the unintentional lapse on his part. For unauthorized absence some minor fine was imposed for each absence and the absentees were also caned. Once one student of a junior class, with a rebellious streak, asked the Principal why he was being punished twice over. The Principal had never expected such a conduct. He flew into a rage, cane charged him while hurling choicest expletives. Not satisfied, he called his guardian to the college and expressed his deep sense of dismay and shock that a student should ask such a question challenging his authority and discipline. The guardian assured of rectitude on the part of his ward. Such was his drive, commitment, passion and will that he could not bear his students bunking the classes. During winters, Kherakhal becomes severely chilly and with occasional snowfall, it becomes colder. Some backbenchers would quietly escape to rocky caves on the the back side of the college to bask in the sun. On a tip, and so enraged, he would rush to the top of the ridge, hurl expletives and rain boulders but luckily there were no casualties. But then there was a certain democratic streak in him. The ironman was quintessentially a soft hearted person open to reason and good sense. For many years, till there were no other intermediate colleges in the hinterland, Kherakhal had also a hostel for students from far flung areas. On every Saturday in the second half, the entire college went to nearby forest to collect fuel wood. Once, some students mustered courage and voiced their unwillingness to go for fuel wood collection being day scholars. The Principal, momentarily annoyed, but passed order that only hostlers will collect the fuel wood. The reputation of his college was always uppermost with him and therefore gave science and English to those students who would be able to pass the High School Exam of the Allahabad Board. Those who failed to acquire the minimum marks in the 9th standard, would be detained to rewrite the exam next year. He taught English to High School classes and particularly laid great stress on mastering grammar.

He had remarkable interpersonal skills and was very popular among the locals for his admirable qualities of head and heart and as the unquestioned guide and guardian of his students. Despite lack of infrastructure and the additional responsibilities shouldered by the students and the teachers, principal Kandari took every conceivable care to hold extracurricular activities. Cultural Programmes and debates were periodically organized and we were encouraged to participate. The Independence Day and the Republic Day functions were a big hit and people thronged to these Programmes from nearby villages in huge number. He was himself a good writer and a story teller, and that too in chaste Garhwali, so relished by the audience.

When Kherakhal became GIC, he had to be transferred out and he was made principal of GIC Srinagar, considered a tough and challenging assignment but soon he earned encomiums there too for his unwavering belief that the students’ interest is first and for his manifest whole hearted dedication to the cause so dear to him. Later, he was promoted as the District Inspector of Schools. Retirement gave him time to pursue his literary pursuits. He collected and annotated 14000 idioms and phrases of Garhwali which were on the vanishing point of extinction. It’s a Magnum opus of Garhwali literature and has emerged a popular reference book. He was a prolific writer. He wrote two other books, Garhwal Lok bhashae and Garhwal mai janshrutia aivam viswas ( the dialects of Garhwal and the folklores and beliefs of Garhwal). Despite paralytic attack in 2012, he continued his literary passion and socio-cultural services. He was popular and much adored in his life time and decorated with many literary awards. He was so elated and his eyes moistened when I visited him, two years back in JNU at the residence of Prof. Butola, his son in law. He was mentally agile though paralytic attack had adversely affected his speech.

In his death, we have lost an ace administrator, an ironman for a just cause, and institution builder and we his students owe a lifelong gratitude to him for moulding, shaping and chiseling us into what we are. As his dear students, now scattered far and wide, across continents and professions, we pay our humble, respectful homage to our Teacher and Architect.

(Devender Singh Aswal is a student of Pushkar Singh Kandari and ex-Additional Secretary, Lok Sabha. He is currently Adviser to Education Minister, GoI.)