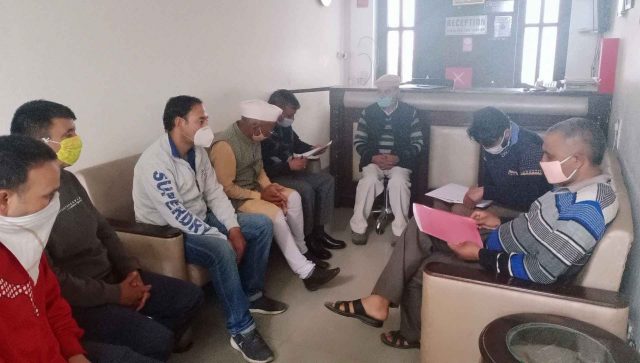 MUSSOORIE, 14 Jun: A meeting was organised here, today, by the Home Stay Association regarding the rules made by the government on Unlock-1. Association members held detailed discussions on the occasion.
Devi Godiyal, President of the Association, told reporters that the condition of home stays had worsened during the lockdown. The government’s plan on home stays was to provide a means of employment in the tourism sector, but during the lockdown no help was provided to the owners. He said that most of the home stays in Mussoorie had been established by taking loans from banks. Due to the closure of work during the lockdown, bank instalments were not paid on time, but the banks were continuing to charge interest.
He added that the Association wanted the state government to waive all the water and electricity bills of the home stays during the lockdown. At the same time, there was a demand for exemption in interest on loans. Soon, the Association members would meet the Sub-Divisional Magistrate, Mussoorie, and submit a memorandum addressed to the Chief Minister on their difficulties. He expressed the hope that the Chief Minister would help them.
A new executive committee of the Association was also formed on the occasion in which Patron Ram Prasad Kavi, President Devi Prasad Godiyal, Vice President Surendra Singh Rawat, Secretary Ramesh Bhatt, Treasurer Kuldeep Singh Negi, Joint Secretary Asha Dutt, Executive Member Baldev Singh Rawat, Sunil, Anupam Singh Negi and Organization Secretary Ram Dayal Gupta were appointed.