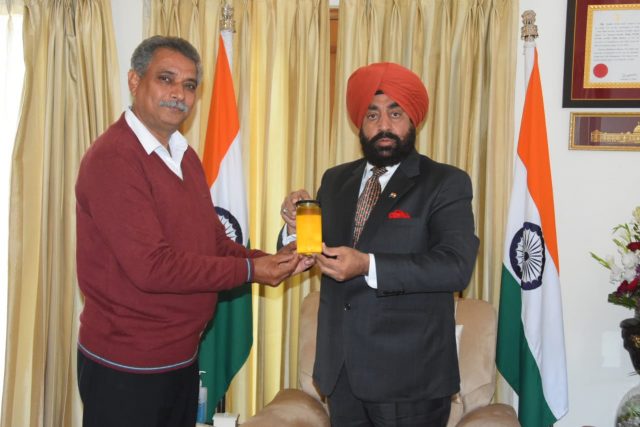 By Our Staff Reporter
Dehradun, 6 Dec: Officials of the Horticulture Department and Maun Palans met Governor Lt-General Gurmit Singh (Retd) at Raj Bhavan on Tuesday and presented honey and pollen produced in the higher Himalayan regions of the state. On the instructions of the Governor, 10 boxes were planted by the Horticulture Department in the vicinity of Valley of Flowers, Govindghat, Ghangharia and Chopta during Basant Utsav. 300 kg of high quality honey has been produced from these 10 boxes including royal jelly honey produced by bees for the queen bee.
Lt-General Singh said that pollen contains immense medicinal properties and is in high demand due to its low availability in the international market.  Instructing the officers of the Horticulture Department, the Governor said that with the aim of producing “money from honey” in the state, all campaigns should be encouraged.  He said that through the honey produced in the higher Himalayan regions of Uttarakhand, the farmers would get direct economic benefit.

In-charge Garden, Raj Bhavan Deepak Purohit said that during the Vasantotsav, 10 boxes were installed in the Raj Bhavan, from which 110 kg honey was produced.  After which instructions were given by the Governor to install 10 boxes in the higher Himalayan regions. 300 kg of high quality honey was produced from the same 10 boxes.

Garhwal Post has established itself as a credible, balanced and forward looking newspaper in India. Based in Uttarakhand, the daily is read by the aware, socially and culturally responsible, high-income elite of society.
Contact us: info@garhwalpost.in
best dating sites uk for over 50 https://garhwalpost.in/third-base-dating/ asian dating site edmonton