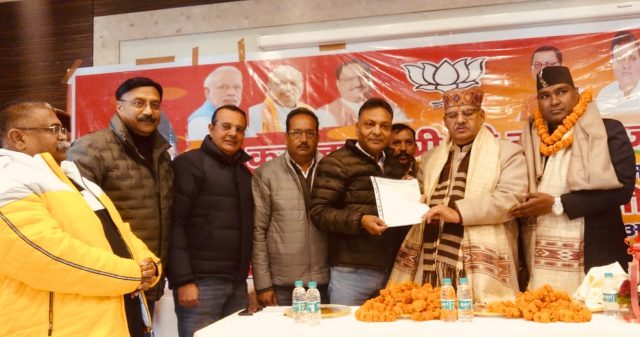 Mussoorie, 22 Dec: The Mussoorie Hotel Association has submitted a memorandum to Cabinet Minister Ganesh Joshi demanding that one of the two meetings of the G-20 to be held in Rishikesh in May-June 2023 be held in Mussoorie. Under the leadership of State President of Uttarakhand Hotel and Restaurant Association Sandeep Sahni, President of Mussoorie Hotel Association Sanjay Aggarwal and Secretary Ajay Bhargava, a delegation submitted a memorandum to Minister Joshi demanding the G-20 meeting be held in Mussoorie.

Sandeep Sahni said that two meetings of G-20 are proposed in Rishikesh in the month of May and June 2023. He wanted one meeting to be held in Mussoorie so that people from different countries can come to the Queen of the Hills with a clean environment and natural beauty. He pointed out that Mussoorie is very close to the airport and the infrastructure here is also strong. Mussoorie and its surrounding areas would be greatly benefited by holding the meeting by receiving unprecedented international exposure.

Cabinet Minister Ganesh Joshi said that he would present the proposal to the top leadership and the Chief Minister and expressed the hope that the request will be accepted.

Garhwal Post has established itself as a credible, balanced and forward looking newspaper in India. Based in Uttarakhand, the daily is read by the aware, socially and culturally responsible, high-income elite of society.
Contact us: info@garhwalpost.in
100 percent free muslim dating sites https://garhwalpost.in/lesbian-dating-app-uk/