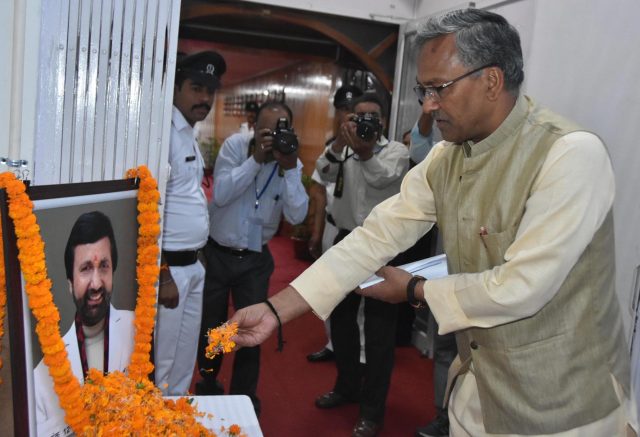 Dehradun, 24 Jun: The first day of the two-day session of the Uttarakhand Assembly was dedicated to the late Prakash Pant. Rich tributes were paid to the late leader who passed away on 5 June while undergoing treatment at a US hospital for lung cancer. As soon as the House gathered at 11 a.m., Parliamentary Affairs Minister Madan Kaushik officially announced the demise of Prakash Pant, who was a minister and a member, and sought the permission of the House to suspend Question Hour under rule 315 related to proceedings of the House to pay tribute to the deceased leader. This proposal was unanimously accepted. Chief Minister and the Leader of the House Trivendra Singh Rawat reminded members that Prakash Pant was not only a well respected popular leader and a thorough gentleman, but also had deep interest in literature and social service. He reminded that Pant began his political innings as a student leader and was elected as a member of the UP Legislative Council in 1998. After the creation of Uttarakhand as a separate state in the year 2000, he was nominated as Speaker of the interim House and was the youngest speaker of a state assembly in all the Commonwealth countries. Rawat further reminded the House that Pant was a creative person and had also published a collection of his poems called “Ek Awaaz Prarabdh”, a travelogue titled “Meri Aadi Kailash Yatra” and a collection of stories written by him, titled “Ek Thi Kusum”, besides an essay called “Lakshya”. He was an avid shooter, too, and had won a gold medal at the state level shooting championship. Rawat added that Pant was not only a popular political leader but also had an attractive personality and charmed all he met. He kept calm and always wore a smile while responding to the questions and allegations levelled by the members of the Opposition parties in the state assembly. He rose above party considerations to discharge his duties when he was the Speaker. Rawat recalled his long association with Pant and stressed that he had a profound knowledge of legislative matters. He further stressed that Pant would be long remembered as he had the ability to respond to every hard hitting question and allegation in a very gentle manner and with a smile. Pant always lent a very patient ear to people coming to him with their problems. While paying tribute to the late Pant, the CM turned emotional and stopped speaking for a while to control his emotions. He also extended his sympathies to Pant’s family and prayed to the Almighty to impart strength to his wife, his parents and children to bear the huge loss. Leader of the Opposition Dr Indira Hridayesh, too, lavished rich praise on Pant and reminded the House of his ability to take everyone together irrespective of party affiliations. She added that Pant had a polite, amiable and simple nature and was studious and knowledgable. She added that although Pant was young when he became speaker and later a minister, he handled his responsibilities in a mature manner. Tourism Minister Satpal Maharaj said that Pant was a great human being and his profound knowledge with respect to house proceedings and legislative issues was encyclopaedic in nature. BJP member Munna Singh Chauhan, too, praised Pant for his simplicity and deep knowledge of parliamentary practices. He said that Pant had great restraint and control over his behaviour and his language. Chauhan added that Pant chose his words carefully and had set high standards of parliamentary practices and left an indelible imprint on Uttarakhand politics. Deputy Leader of the Congress legislative party, Karan Singh Mahra too offered glowing tribute to Pant and reminded the House that Pant was a rare combination of humility and intellect and he was always eager to help and guide first time MLAs irrespective of their party affiliations. Members Madan Kaushik, Preetam Singh Panwar, Harbans Kapoor, Bansidhar Bhagat, Bishan Singh Chufal, Rajkumar were among those who offered their tribute to Pant in the House today. Later, the House was adjourned till 11 a.m. tomorrow!