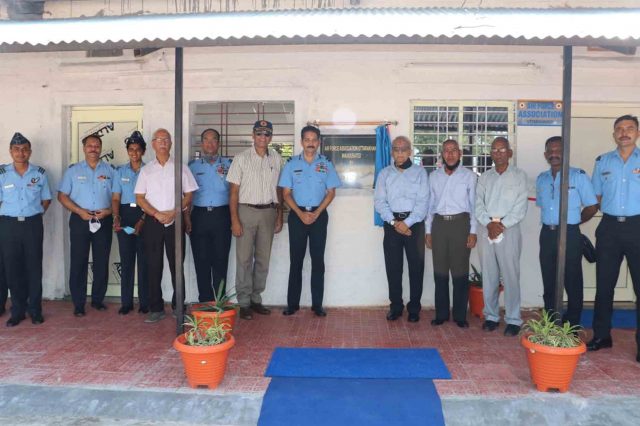 Dehradun, 8 Oct: The Air Officer Commanding of the No. 1 Air Force Selection Board, Air Commodore SK Mishra, inaugurated the official premises of the Air Force Association (AFA), Uttarakhand Branch, in the Selection Board domestic area, here, along with Air Commodore Amul Kapoor (Retd), President of Air Force Association, Uttarakhand, and his team, on the 89th Indian Air Force Day, today.
After the inaugural ceremony, the AOC handed over the keys of the premises to Air Commodore Amul Kapoor. Kapoor thanked the AOC and his team for the support to the AFA, Uttarakhand Branch.
The present AFA Uttarakhand team comprises Wing Commander Anil Dobhal (Retd) as the Senior Vice President, MWO (Hony Fg Offr) DS Patwal (Hony Treasurer) and MWO (Hony Fg Offr) SS Sajwan (Hony Secretary). The contact numbers of AFA, Uttarakhand are 8077591841 (President) and 987702874 (Hony Secretary).
Though approved by the Central AFA HQs (New Delhi) in November 2019, the repair work and inauguration of official premises of Uttarakhand Branch of the AFA was delayed due to COVID-19 restrictions.
The Air Force Association looks after the welfare of all veterans of the Indian Air Force (who are members of the Association) and their respective families.

Garhwal Post has established itself as a credible, balanced and forward looking newspaper in India. Based in Uttarakhand, the daily is read by the aware, socially and culturally responsible, high-income elite of society.
Contact us: info@garhwalpost.in
hooking up in san antonio