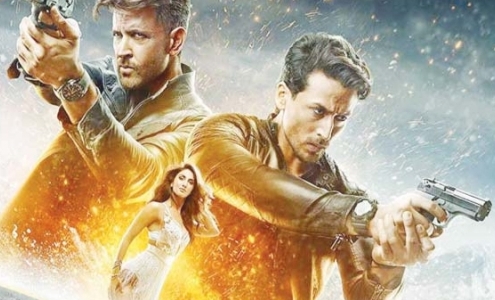 Film stars aren’t immune to getting older. Taking on years with grace is an art. Like fine wine, some stars only get better-looking with time. Hrithik Roshan too defies age and emits radiance through his well-toned body, superb acting and mesmerising action-cum-dance scenes in War providing incessant dose of spectacular action. Paired with him, in all field adventures, is his life-long fan Tiger Shroff. Both the hunks set the screen on fire with their thunderous action and dazzling chemistry. On one hand Hrithik’s charm, acting, dance and personality stands at par or even better than best of Hollywood stars, on the other hand Tiger’s youthfulness, agility and innocence matches brilliantly with the man he adores. Yet, the eyes remain glued on Hrithik wherever they both share the frame. It’s a double-scoop bonanza for those in love with thrillers. India’s best soldier Kabir (Hrithik Roshan) goes rogue and is eliminating influential people. Khalid (Tiger Shroff), the best man in line, is then brought in the act. Khalid has immense respect and love for Kabir, his mentor. It’s an emotionally and physically challenging job for a protégé to track the man he respects the most. The roles are befittingly played by both. The story structure of Siddharth Anand-directed War is predictable and weak against the strong action-packed chases on planes, bikes, feet and cars clubbed with immaculate performance by the lead stars. The extravagance in terms of choosing locations from all over the globe right from Kerala, Malta, Iraq, Marrakesh, Morocco, Portugal and Australia to Arctic Region presents a visual spectacle for the quintessential action-cinema lovers. The lavish sets add the rightful pomp. The expensiveness oozes out in each frame and not even a single moment passes without having an edge-of-the-seat experience. Ben Jasper, the cinematographer of War, captures stunning locales from the best angles for the shoot and chase, multiplying the overall viewing experience multi-fold. To provide a gush of adrenaline rush in the blood, four of the top action directors from different parts of the world have been roped in. Paul Jennings of The Dark Knight and San Andreas fame, Franz Spilhaus of Death race: Inferno, Sea Young of Avengers and Parvez Shaikh of Tiger Zinda Hai, all four specialists direct a spectacular show. War comprises so many breath-taking stunts on land, sea and sky. The two stalwarts create magic providing never-seen-before actions believable at par with Mission Impossible series. The story possesses no novelty but the tremors created by the action sequences cover up the weak script. War is an enjoyable watch from beginning to the end. The cutest scene remains when Kabir’s junior, Neha (Anupriya Goenka), in a playful banter on her wedding day offers to elope with Kabir if he asks her to do so. On this Khalid with ‘seen-before’ shyness, says, ‘fall in line’. The charisma of Hrithik is captivating and has been blatantly shown in the film. Hrithik’s first entry is mind-blowing and sweeps one off their feet. As he steps down from the helicopter – his tanned skin, toned muscles, Greek-God looks, chiselled body, and adorable swagger – makes us miss a beat. His senior, Col Luthra (Ashutosh Rana), Neha, Khalid and others look at him with besotted eyes and their jaws drop in awe and the hall resonates with whistles. He’s a man with perfect physique, who has aged quite handsomely, who carries age-appropriate right number of strands of salt-peppered hair behind his temples and has hazel green eyes – the oomph factor is unmissable in its radiance. What works in the film’s favour is the adorable bromance. The respect and admiration in Khalid’s eyes for his mentor Kabir is very well emulated by Tiger in almost all the frames. They even diminish the need for a female cast in the film. The titillating pair crackle the screen with their staunch get-up, something that has been experienced for the first time at par with the best of Hollywood action films. Be it a dance number or duel fights, car-bike chase or car drifting on arctic ice sheets, amazing action inside a fire-caught engine of a plane, no moment is spared to go waste without an astonishing charge. Hrithik rightfully deserves this admiration on screen and off screen, both. He is in great form. He looks as comfortable as an old shoe in every shade whether it’s a dance or action or an emotionally challenging scene. Tiger’s energy is infectious. He has the capability to bring out unique fight scenes. His attacks remain as fast as arrows. His youthfulness, flexibility and lightning stunts are overwhelming and compliment the ‘boyishly’ beautiful Hrithik equally well. Vaani Kapoor is ravishingly beautiful and has a small but significant role to play. Soni Razdan, mother of Khalid and wife of a traitor, in a cameo role, says it all through her eyes. The songs are forcefully added to an already long film. They do not disappoint at all as they are very well-choreographed by Bosco Martis and Caesar Gonsalves. The dance steps from War songs are already popular and remain a solid rocking treat. If Hrithik dances like a cork upon the waves, Tiger sways as a bright and buoyant flame. Whistles, hoots and claps fill the hall making the experience more relishing. War has nothing new to offer yet it is crispy, stylish, smart and slick. Duration of the film remains long but the thrilling world tour it offers with the two most handsome action heroes pumping in their full swagger is a ride worth buying.

Garhwal Post has established itself as a credible, balanced and forward looking newspaper in India. Based in Uttarakhand, the daily is read by the aware, socially and culturally responsible, high-income elite of society.
Contact us: info@garhwalpost.in
south asian dating dating websites for people with herpes https://garhwalpost.in/online-christian-dating-sites/