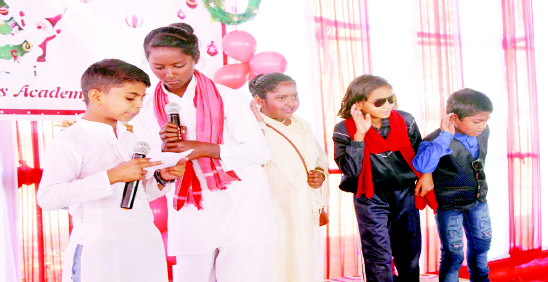 By OUR STAFF REPORTER
DEHRADUN, 15 Dec: Himalayan Torch Bearers Academy Dehra Khas celebrated Christmas along with the children and their parents of the locality. Present to celebrate with them as the Guests of Honour were Satish Sharma of Garhwal Post and the newly elected ward member of the area Alok Kumar. The children presented beautiful cultural and folk dances.
They also presented a heart warming skit to explain the value of education. An important message for the parents as the school is built to serve the children from the slum areas of Dehra Khas. The occasion also included Christmas carols sung by children and guests as well as a play explaining the true meaning of Christmas. Satish Sharma encouraged the students by telling them that their “tomorrow depended on what they did today”. Urging them to work hard and spend less time on digital devices, Sharma gave his warm wishes for the season. Ward Member Alok Kumar also gave his greetings for the festival and made known that he was at the service of the parents or children 24 hours.
Dr. P. Satish John founder of Himalayan Torchbearers and Vice-Chairman State Minority commission, gave an address in which he talked about the fact that Christ came to this earth to spread love and peace. He further explained that money and possessions would never bring satisfaction but that it was important to serve one another just as Christ did. He appreciated the hard work of the principal and the teachers in developing these children not only in the academic excellence but also making them into a happy and useful citizen of our country. Roseline Doungel the Principal gave the vote of thanks in which she thanked her teachers for their hard work and also commended her students. The celebration ended with the singing of National Anthem.