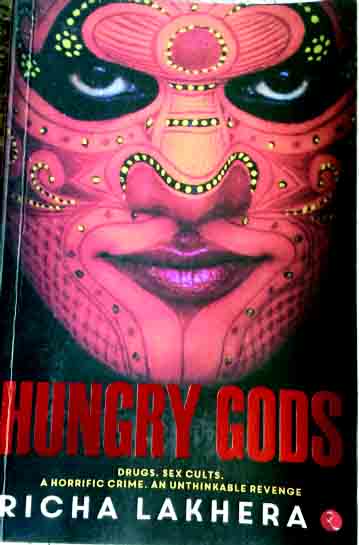 ‘One is always in Love with something or the other. The
error lies in seeking in a mortal something that is perhaps immortal.’ That’s the gist if you were to paraphrase the poet Percy Bysshe Shelley.
You could take that as the basic matrix of this well-written tale as it unfolds into the abyss of darkness, which shall leave you more than rattled. Hungry Gods is much more than a passing peek at the insatiable lust for wealth and power.
And the trouble with power, as Lord Acton, the British historian of the last nineteenth and early twentieth century once pointed, laid out in his famous dictum: ‘Power tends to corrupts; absolute power corrupts absolutely.’
On the very first page, the girl is a witness to her mother’s murder. Suddenly it hits her that the old woman is gone forever. Never again will she hear her whisper about healing spirits – some good, some really bad. ‘She would never show me the pollen from flowers of multiple fragrances to get demented souls back from the brink….’
Then there’s Neville Valentine the aging movie star, who will peddle almost anything on the single-minded condition that money is to be made; there’s the pharmaceutical company, Medici clandestinely producing banned drugs; there’s the pervert Ranganathan of the high-pitched voice, stalking the street, waiting for the dark, and Este, the prostitute, the storehouse of enough ugly dark secrets that would blow anyone’s mind.
In short, crisp chapters, the story inches forward with bated breath: will it lead up to yet another blood bath? You are left wondering if Inspector Silva is capable of joining the dots to prevent the impending crime?
And Medici’s studio is not in some lost, forgotten alley. It’s so in your face: a megalith twelve stories high in the center of the city. They sell their “Healing for All’ concoctions at exorbitant prices. Products that the sleazy film-star Valentine promotes for a hefty fee. But amidst the honk-dory, there’s trouble brewing. Medici has to protect its business and the fact that their brand ambassador’s girlfriend’s black eye and swollen face have gone viral on the net does not bode well for a company that surrounds itself in a smoke screen of peace, non-pollution, healing and sustainable development.
Into this murky world arrives Inspector Silva, widowed at thirty-six after his wife’s death in a road accident. On a hunch he arrives at the Dune – ‘the valley of the beautiful’ –defies all descriptions of ugliness: short, nasty and brutish for sure, and flowing over the brim with opiated souls on a one-way ticket to hell.
Will he or will he not be able to prevent the next murder? I guess to find out you will have to get a copy of this un-put-down-able book and finish it in a single sitting.
Courtesy: The New Indian Express