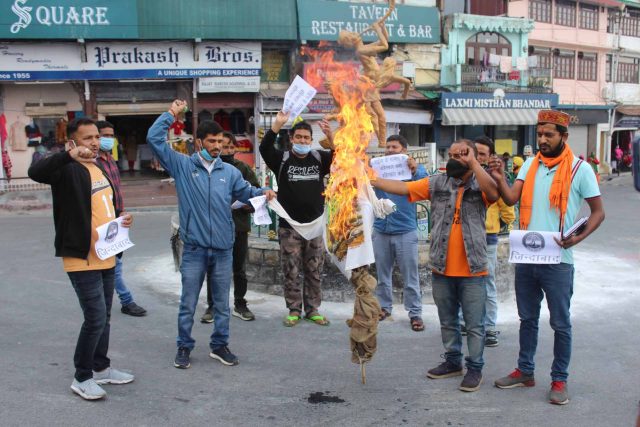 MUSSOORIE, 22 Jun: ‘Hindu Yuva Vahini Bharat’ activists, led by the Uttarakhand Vice President, Sandeep Rawat, and social worker Sandeep Khanna, gathered at the Gandhi Chowk here, today, and paid tribute to the martyrs of the Galwan Valley.
They raised slogans against the Chinese government and burned the effigies of China. They urged people to boycott Chinese goods. They also urged the Government of India to trade with China. They said that China was using India’s money against it. The time had come to teach China a lesson. China had always attacked India by conducting the politics of deceit. They said that, if India went to war with China, each youth of the country was willing to join the forces.
Present on the occasion were District Vice President Sandeep Rawat, Ramesh Prasad Gaur, Sagar Kumar Jaiswal, Ajay Thapa, Siddharth Rawat, Kumud Sharma, Shahzad Ahmed, Ajay Thapli, Rohit Kumar, Satpal Rawat, Sumit Kumar, Harish Kumar, Kuldeep Singh, Pradeep Rajguru, Sandeep Khanna and others.