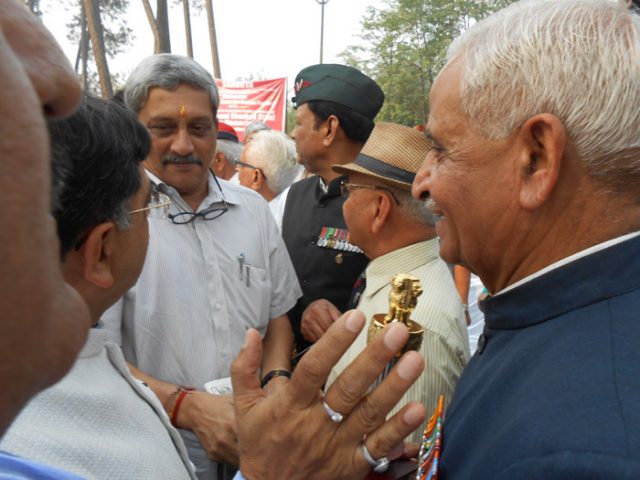 By Lt Col BM Thapa (Retd)
Four-time Goa CM and former RM Manohar
Parrikar passed away after a battle with pancreatic cancer at his residence on 17 March and cremated on 18 March with full military and state honours. His promise on 30 April, 2016, at Cheerbagh War Memorial still echo in the minds of us Doonites.
As a Raksha Mantri, during his last visit to Doon Valley on 30 April, 2016, not only did he lay the foundation of First War Memorial in Uttarakhand’s capital, but also promised that he would again come back to inaugurate the same on completion. It was due to his support and efforts, along with those of former Rajya Sabha MP Tarun Vijay, MLA Ganesh Joshi and Brig KG Behl (Retd) that the First War Memorial in Doon Valley is now under construction, today.
He had also presented mementos to Lt Gen OP Kaushik (Retd), Vice Admiral Vinay Badhwar, Brig KG Behl (Retd), Cols BM Thapa, BD Gambhir, DK Kaushik, KS Mann, RP Jairath, US Thakur, SS Thapa and many others.
He was a great son of the soil and the loss is irreversible and incalculable. He made all of us proud. He proved himself a true fighter, who fought against the dangerous illness of Cancer while continuing with regular service of the state. He will always be remembered for his good deeds and the memories he left behind for all of us to get inspiration. A widower, Parrikar is survived by his two sons, Utpal and  Abhijat, their wives and a grandson. Deep condolences to his family members and supporters from all Ex-Servicemen of Doon Valley.