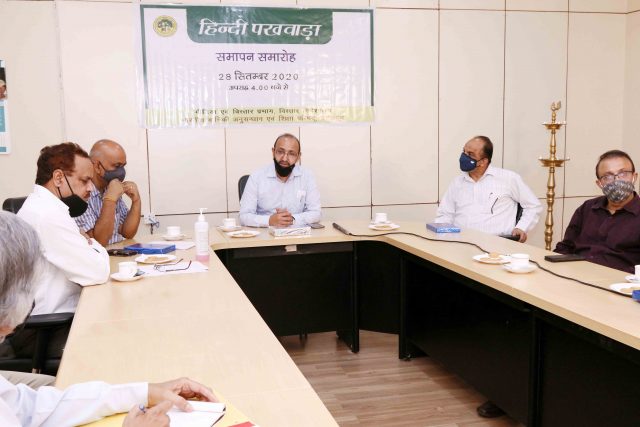 By Our Staff Reporter
Dehradun, 28 Sep: Indian Council of Forestry Research and Education (ICFRE) celebrated the Hindi Fortnight from 14 to 28 September. The closing ceremony of the event took place today at the ICFRE Committee Room. AS Rawat, DG, ICFRE, was the Chief Guest on this occasion. While addressing the gathering, he stated that though the fortnight was completed, it was necessary to maintain its spirit all through the year. He also stressed that, being in the “A Region”, implementation of Rajbhasha Hindi was not merely achieving the targets fixed by the Government but also a moral responsibility.
Dr Sudhir Kumar, DDG (Extn.), while delivering the welcome address, laid emphasis on the importance of Rajbhasha Hindi and informed the audience about the various activities conducted during the Fortnight, including six competitions, namely Noting-Drafting, Hindi Essay Writing, Hindi Translation, Hindi Debate, Hindi Quiz and Self-Written Poetry Recitation in which 56 participants actively participated. He also disclosed that the “ICFRE Rajbhasha Puraskar” was awarded to Forest Research Institute (FRI), Dehradun for best performance amongst the institutes situated in ‘A’ region and Institute of Forest Genetics and Tree Breeding (IFGTB), Coimbatore for best performance amongst the institutes situated in ‘C’ region in best implementation of Rajbhasha Hindi for the year 2019-20.
The “ICFRE Rajbhasha Protsahan Puraskar” was awarded to ten personnel of ICFRE for overall performance in implementation of Hindi in their official works during the year 2019-20.
The winners of various competitions held during Hindi Fortnight were announced by Dr AK Pandey, ADG (M & Extn.). The programme concluded with a vote of thanks proposed by Dr AK Pandey. Due to COVID-19 pandemic, only senior level officers including SD Sharma, DDG (Admin & Res.), Dr Sudhir Kumar, DDG (Extension), Anurag Bhardwaj, Director (IC), and NC Sarvanan, Secretary, ICFRE were present during the closing ceremony. The programme was webcast live for personnel of ICFRE.