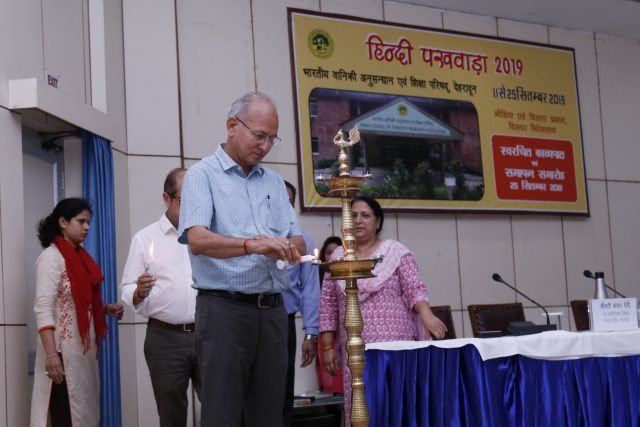 DEHRADUN, 25 Sep: Indian Council of Forestry Research and Education (ICFRE) celebrated Hindi For tnight from 11 to 25 September. The closing ceremony of the event took place today at the ICFRE Auditorium. Dr Suresh Gairola, DG, ICFRE, was the Chief Guest on the occasion. The programme started with the lighting of the lamp by the Chief Guest. He stated that, in ICFRE, the use of Hindi had increased in the last one year and what was needed to continue with this pace till the targets fixed by the Government could be achieved. He further stressed that implementation of Rajbhasha Hindi was a national responsibility. Vipin Chaudhary DDG (Extn), while delivering the welcome address, laid emphasis on the importance of Rajbhasha Hindi and informed the audience about the various activities conducted during the Fortnight including seven competitions, namely Noting-Drafting, Hindi Essay Writing, Hindi Translation, Hindi Typing, Hindi Debate, Hindi Quiz and Self-Written Poetry Recitation in which 68 participants actively participated. He also added that “ICFRE Rajbhasha Puraskar” was awarded to Forest Research Institute (FRI), Dehradun, for best performance amongst the institutes situated in ‘A’ region and Institute of Forest Genetics and Tree Breeding (IFGTB), Coimbatore, for best performance amongst the institutes situated in ‘C’ region for best implementation of Rajbhasha Hindi for the year 2018-19. The “ICFRE Rajbhasha Protsahan Puraskar” was awarded to ten personnel of ICFRE for overall performance for implementation of Hindi in their official works during the year 2018-19. Prizes were distributed to the winners of competitions held during Hindi Fortnight by the Chief Guest, Dr Suresh Gairola. The vote of thanks was proposed by Dr Shamila Kalia, ADG (M & Extn.). About 100 officers, scientists and employees including SD Sharma, DDG (Research), and Kanchan Devi, DDG (Education) were present during the closing ceremony.