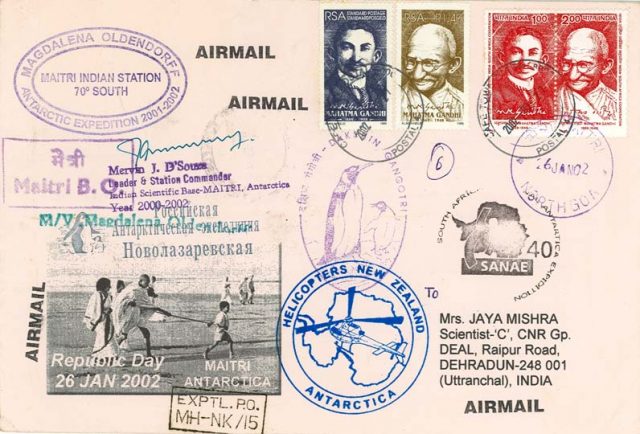 Dehradun, 21 Nov: This year, Valley of Words, International Literature & Arts Festival (23-25 November) in Dehradun will have a Philatelic Exhibition on Antarctic exploration. The ice sheet in Antarctica originated perhaps more than 50 million years ago and acts as an extremely well preserved repository of all things falling on it and buried in it such as fragments of cosmic bodies, nuclear product cosmic rays and samples of entrapped air and minerals. The first sighting of Antarctica was done by Nathaniel Palmer in 1820. The earliest known photographs of Antarctica were taken during BELGICA (1897-99) expedition. The heroic era of Antarctic exploration is considered till 1935 (Byrd II expedition). The seventh continent of the world is a demilitarised and nuclear free zone and offers freedom for research.

In the beginning of the twentieth century, the focus of the Antarctic Explorers was to reach the Geographic South Pole. In 1911, before arriving in Antarctica, Captain Scott had discussed with Oates about using Himalayan mules for the attempt to the South Pole in the summer of 1912. These mules have done great job in Northern India and Tibet. In March 1911, seven mules were sought from the Indian Government. Few know that these mules were trained for their arduous journey in the icy continent at Landour, Mussoorie.

The Graphic News Paper of 9 September, 1911, reported, “It is a far cry from India to the Antarctic regions, but still not far enough to prevent the Indian Government from taking part in preparations for the attack on the South Pole. Lt General Sir Douglas Haig, Chief of the Indian General Staff, is sending Captain Scott, as a gift from the Government, seven specially selected mules which were trained at Landour, Mussoorie, for sledge work by Lieutenant G Pulleyn, of the Indian Supply and Transport Corps. Mules of the Indian transport have done wonderful work in Northern India and in Tibet, where the cold is very severe, so there seems little doubt that these animals will do well in the Antarctic, while they can draw greater loads at a more uniform pace than could be expected from ponies.”

The first Indian to visit Antarctica was Dr Giriraj Singh Sirohi in 1960-61. He conducted a unique experiment related to Biological Clock at the South Pole. To honour his contributions, the US Board on Geographic Names named a point in Antarctica, ‘Sirohi Point’, in 1966. Dr Paramjit Singh Sehra was the first Indian to winter over in Antarctica with the 17th Soviet Antarctic Expedition (1971-73). The first Indian expedition to Antarctica was sent in 1981. Since then, India is continuously sending expeditions to the icy continent. The first permanent station, “Dakshin Gangotri”, was established in 1983 on the Prince Astrid ice shelf. “Maitri” was built during 1988-89, while the third station, “Bharati”, became operational in 2012 at Larsemann Hills, East Antarctica.

During the seventh Indian expedition, a post office was established at “Dakshin Gangotri” under the aegis of North Goa postal division, Goa-Panaji region, Maharashtra circle, with pin code 403001. The first letter was posted on 26 January, 1988, on Republic Day. Postal mails from Antarctica are very special as they cover approximately 25000 Km. to and from and go through various mode of transports viz. ship, helicopter, airplane and railways.