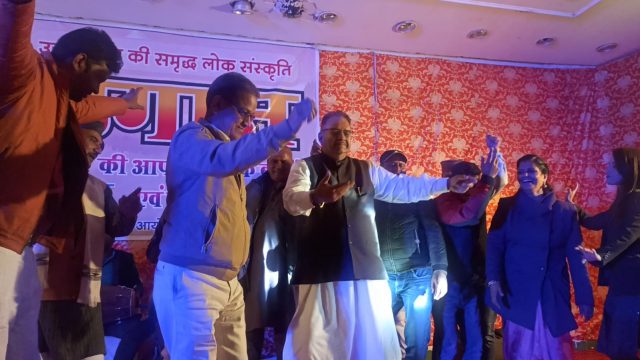 By Our Staff Reporter
Mussoorie, 14 Nov: The Igaas festival was celebrated with great pomp, here, today. Members of various organisations danced in traditional costumes with enthusiasm. The people expressed their gratitude to Chief Minister Pushkar Singh Dhami for declaring a holiday on the occasion of Igaas following with the campaign launched by MP Anil Baluni to celebrate the festival.
People swayed to Bhailo and other traditional dances. Pahari delicacies were also served to the people.
The Mussoorie Maha Parivar organised an event at Shagun Palace, while the Mussoorie BJP Mahila Morcha President Pushpa Padiyar held one at the Martyrs’ Memorial. The people were introduced to the culture of the state. Egaas was also celebrated at Jhula Ghar by the Mussoorie Garhwal Mahasabha. Singers along with folk artists gave performances. Chief Guest Cabinet Minister Ganesh Joshi danced to the folk songs with the people and artists.
While congratulating the people of the state, Joshi said that the decision to declare Igaas a holiday had been welcomed by the people. Many migrants were also learning to celebrate the festival. The younger generation would become aware of their culture, costumes and food.
Present on the occasion were Mussoorie BJP President Mohan Petwal, Mussoorie Municipal Chairman Anuj Gupta, former Chairman OP Uniyal, Pradeep Bhandari, Kamal Bhandari, Abhilash, Sapna Sharma, Anil Singh Annu, Singer Jitender, Prakash Rana, Bhanva Goswami and many others.