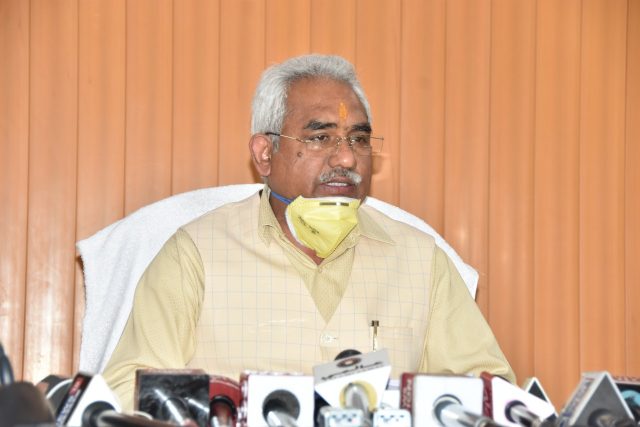 DEHRADUN, 24 Mar: In the Cabinet Meeting held today under the chairmanship of Chief Minister Trivendra Singh Rawat, the focus was the ways and means to deal with the Corona crisis. Government Spokesman Madan Kaushik briefed the media of the crucial decisions taken by the cabinet today.  The Government has decided to reserve the four government medical colleges at Dehradun, Haldwani, Srinagar and Almora mainly for treatment of Corona patients.  While other medical specialities and OPDs would be temporarily shifted to other hospitals of the state.  Considering the possibility of requirement of larger number of tests for COVID-19 in near future, the government also approved two other test centres. These test centres would be located at Indian Institute of Petroleum (IIP) Dehradun and All India Institute of Medical Sciences (AIIMS). Till now, all the tests were being conducted at Haldwani only.  The HODs of Srinagar, Haldwani and Doon Medical Colleges were given authority to recruit doctors against the vacancies through interview. The District Magistrates were also given authority to recruit doctors for up to 3 months period on a temporary basis in view of the medical emergency. It may be recalled that currently the interview process is underway for recruitment on 314 advertised posts as against the total number of 555 temporary posts that had been created recently. The Cabinet decided that interviews for the remaining of the posts could be filled up without publishing advertisements for the same. Out of 958 posts that were created, permission was granted to appoint 479 surgeons.  The cabinet also decided to release an amount of Rs 3 crores each to District Magistrates of Dehradun, Udham Singh Nagar, Haridwar and Nainital and Rs 2 crores each to the District Magistrates of other districts with the objective of providing interim relief and help to the workers from unorganised sector and for help of needy poor families.   The government also raised the procurement price of wheat by Rs 20 per quintal. As a result, the procurement price of wheat would now be Rs 1945 per quintal as against the previously decided price of Rs 1925 per quintal. In addition, the government also decided to make available 3 months ration supplies in advance  through the public distribution system by the first week of April.