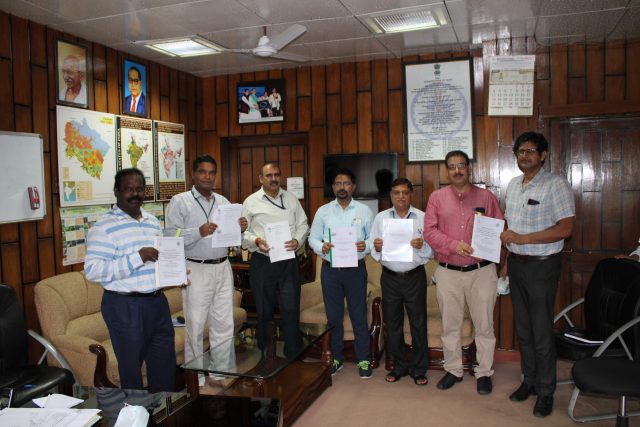 By OUR STAFF REPORTER
Dehradun, 26 Jul: ICAR-Indian Institute of Soil and Water Conservation signed two MoUs, here, today. The first was signed with the National Highway Authority of India (NHAI), for “Developing vegetation based technologies for dust and erosion control along the National Highway”. The director ICAR-IISWC signed the MoU document on behalf of the Institute, while Ajay Sabharawal, General Manager (Technical), did so on behalf of the NHAI.
The failure of fragile slopes along the highways is the main reason for many accidents globally. Further, it becomes the source of dust and has off site effects on reservoir siltation. Dust pollution from the national highway has a known human health hazard and also has negative effect on nearby crops, vegetation and livestock health. The MoU is valid for next three years and the project aims developing suitable technologies for dust control and slope stabilisation along the national highways.
The second MoU was signed with the National Remote Sensing Centre, ISRO, DOS, Balanagar, Hyderabad, for “Establishment of field equipment for validation of evapotranspiration and soil moisture products under National Hydrology Project (NHP)” by the director ICAR-IISWC.
Dr NK Sharma, Dr M Muruganandam, Dr Rajesh Kaushal and Dr Gopal Kumar from ICAR-IISWC, and Pravin Katiyar, Technical Officer, Regional Office, Dehradun, were witness to the MoU signing event.