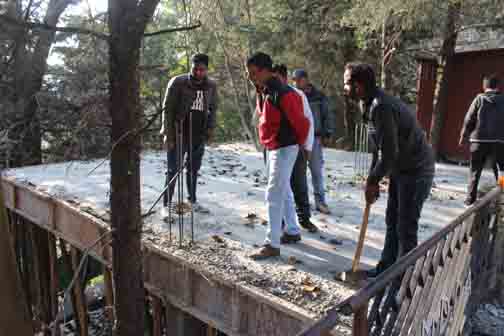 MUSSOORIE, 3 Dec: Action was taken against illegal construction on encroached land was taken by the Municipal Council on Monday at the instructions of Chairman Anuj Gupta. A team of the MMC under the leadership of Tax Supervisor Mahavir Bhandari reached Mussoorie Lake with the police and demolished illegal construction done by Mahadev Agency. After the action by MMC, a commotion was created by the people involved in illegal construction. Chairman Gupta told media persons that it was found that many plots of land belonging to the MMC had been encroached upon and construction undertaken there. He said action wasn’t taken by the previous chairman and board to stop the encroachment, which indicated huge corruption had taken place. The illegal construction at Mussoorie Lake had blocked the view of the lake. He had instructed the Executive Officer to take immediate action on removing the illegal encroachment. He warned no encroachment would be tolerated and cases lodged against offenders.