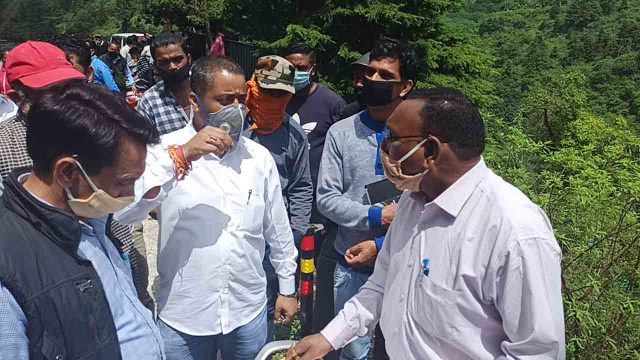 By OUR STAFF REPORTER
MUSSOORIE, 6 Sep: The unauthorised occupation of 18 flats in the IDH Building on the Mussoorie-Tehri Bypass was vacated by the administration and the police, here, on Saturday. The flats were sealed after taking out the belongings of the people by the team led by Mussoorie SDM Manish Kumar and Executive Officer ML Shah.
It may be recalled that, under JNRUM, 96 flats were sanctioned under for poor people, out of which 40 flats were built. The Central Government had sent a list of 40 people to be given the flats, but these had already been illegally occupied by other people. The municipal administration and the police, who went to vacate the flats, had to face heavy opposition from the people.
One person fell unconscious, while women and children could be seen weeping.
The victims claim they were settled here by the municipality after the 2013 disaster, and allege they were not given any eviction notice to vacate the flats. On Saturday, hundreds of policemen forced out the occupants, including children and women.
They evacuees said that, if the administration and government do not rehabilitate them, they would sit on hunger strike with their families at the Municipal office.
Executive Officer ML Shah said that, following the instructions of the higher officials, the flats occupied by unauthorised people living in the IDH building had been vacated. He said that, on 28 August, all the occupants were given instructions to vacate the flat by Executive Officer Ashutosh Sati. He said there was no plan to give these flats to anyone right now. Present on the occasion were Mussoorie Police ln-Charge Devendra Aswal, SI Suraj Kandari and other officials.