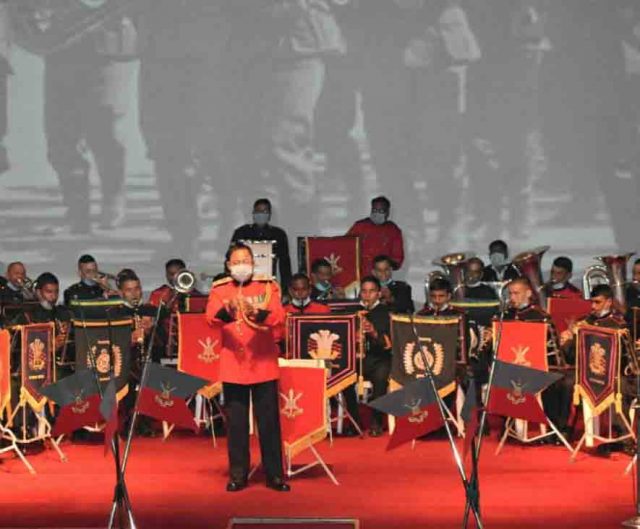 Dehradun, 30 Nov: Bands and Martial Music have been a tradition of the Indian Army since time immemorial. From the earliest times, they have motivated soldiers moving into raging battles using their passionate tunes to evoke intense fervour in the troops. They continue to remain central to ceremonial, social and recreational events adding grandeur and regalia.
To introduce future leaders to the martial tunes and Army bands, a band concert of the Indian Army Bands was held at Indian Military Academy, here, today. The Khetarpal Auditorium at Indian Military Academy reverberated to the mesmerising tunes played in an impressive fusion of instruments like Flute, Oboe, Clarinet, French horn, Bugle, Bagpipe, etc.
The Chief Guest was Lt Gen Harinder Singh, IMA Commandant. Gentlemen Cadets and officers of the Academy were present for this memorable event.
In the Indian Army, the Military Bands and Pipes & Drums therein are treated with profound honor and they are considered the pride of various Units, Combat Regiments. Ceremonies of state and national honours, celebration of victories and military pageants are conducted to the beat and rhythm of military music. The Indian Army today has 50 Military Bands and more than 400 Pipes and Drum bands. The Bands comprise the finest Musicians from various Regiments of the Army. In the recent past, the Indian Army Bands have participated in various Military ceremonies abroad, including Music Festivals in Russia, France, Italy, Japan, United Kingdom, Malaysia and Germany.
The event introduced the significance, rich history and technicalities of Military Bands to the future Military Leaders including the foreign trainees.