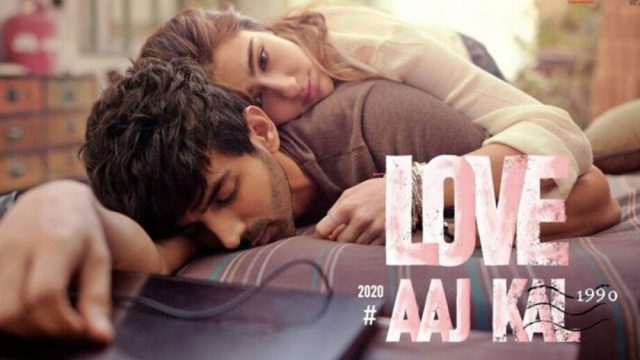 No one can narrate love better than Imtiaz Ali. He successfully delves into this universal emotion and brings to the fore all hues and shades through his films – how love invades, affects, infects, grows, transforms. The love discovered through journeys, past experiences, wisdom of the elders and self-exploration. Not all may understand the nuances of his work as he dives deep into the ocean of love with utmost sincerity. He has mined love in its purest form in sanity and madness both, and in all its profundity, through his characters in Socha Na Tha, Jab We Met, Tamasha, Love Aaj Kal 2009, etc.

The novel idea of making two stories run parallel across two-time gaps with different conflicting circumstances wooed viewers in 2009. The story was heartfelt, characters endearing, the love organic and situations close to reality; making it relatable. In 2020, Imtiaz experiments with the same concoctions. He resorts to story-telling, portraying the muddled love of the millennials, how the age-related immaturity cannot visualise things through their ‘under construction’ cognitive lenses. The film covers commitment phobia. A popular motivational quip reads, ‘When writing the story of your life, don’t let anyone else hold the pen’, but this generation seems to be most affected by peer pressure. They fake most of the time in the pursuit to block genuine feelings, and modulate their emotional outbursts. They are confusingly concerned about their careers. They fill their emptiness with hook ups, one-night stands, and blind dates, ending up messing their lives. Sadly, during this self-exploration journey they lose their true love and end with repentance. He reiterates that love takes birth in every heart in one form. It resides in it in unmutated, unaltered state irrespective of time zone, in the back drop of different circumstances.

Imtiaz’s characters are always complex and confused. Two stories, one of 1990 and the other in 2020, in Udaipur and Delhi respectively, run side by side involving two pairs, Zoe-Veer (Sara-Kartik) and Leena-Raghu (Arushi-Kartik); the latter story narrated by the mature Raghu (Randeep Hooda) to Zoe. This wise and experienced man learnt the essence of true love late, from his mistake. He sniffs the similar passion and flame in Zoe and Veer’s story and gets involved to help. He visualises the same mistakes and stupidity that he committed. He vehemently affects Zoe’s thinking. Zoe is in event management and has borrowed a work space in his café. The alluring love story of Raghu from Udaipur’s passionate lover transforming into a Casanova after catching ‘Delhi ki hawa’ acts as a guiding force in Zoe’s love life. Zoe is a fire brand, obsessed about her career with her plans laid till she retires at 55, with no time for a sturdy relationship in the coming five years. Veer is a simpleton. He carries a funny pout, eyes always down but madly in love with Zoe. He is the epitome of patience, who wants her fully and not half-hearted or in vulnerable moments. The two come close but soon part ways as the perplexed Zoe’s thoughts are invaded by Raghu’s story, her mother’s lofty ambitions and unfulfilled dreams. Zoe prioritizes work over love.

The story remains unconvincing with underexplored emotions. The sugar- coated expressions of Zoe and her brash behaviour never lets her reflect her true self. Veer has depth, an ardent follower of Rumi and Kabir through the wisdom shared on WhatsApp. He gives Zoe full space to spread her wings, playing small himself, available at her back and call. This is where Zoe-Veer’s story fails to sync in. While the story of Raghu and Leena remains endearing, their chemistry lovable and it scales emotional depths; their love is hampered by family, societal pressures, untruthful gossips and finally the love birds forcefully separated. The chemistry between Arushi Sharma, a new comer, and Kartik Aryan is more heartfelt than that of Sara and Aryan. Imtiaz always keeps a couple of heart-churning moments in his films. A scene inside a train when Leena finds Raghu in her compartment, the way both look at each other, the silence creating a deafening impact, especially the expressions of Arushi are heart melting. In another scene at a school function, a dance involving the two is a delight.

Kartik’s performance is much better than his previous films. Sara looks beautiful but fails to do justice to the various phases of her life. Her emotions look superficial as of a disarranged being. But she has her moments – when her date dumps her on a road at midnight, the frustration and helplessness is arrayed well by Sara. The only actor who shines is Randeep Hooda. He endows a pleasant charm to the film as a story-teller, nowhere trespassing the other artist’s zone yet exhibiting an overpowering presence. His part is crucial and he flourishes in every frame.

The music by Pritam is overwhelming and songs have the strength to evoke ‘missing someone’ kinda emotions. Imtiaz always has sparkling moments, philosophical dialogues, said during normal conversation but Love Aaj Kal stands bereft of convincing lines, yet it keeps one glued. I guess the movie will surely make stronger connection with the raw emotions of the millennials who are coherently confused in handling career and love; the title defends its stand, meaning ‘love these days’. A take away – different time periods, different set of lovers, different circumstances, disharmonious emotions but the intensity of love remains the same, essence of love never gets diluted.