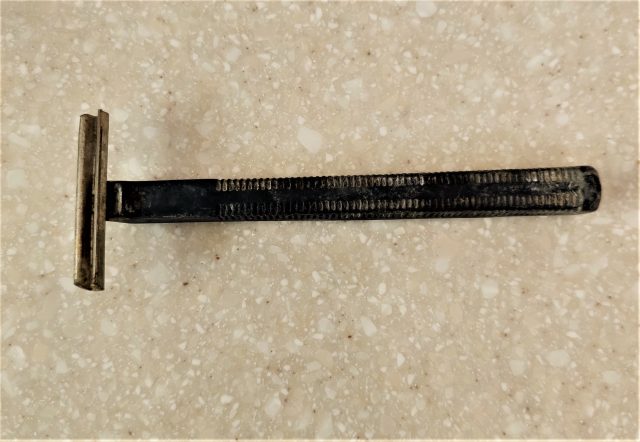 Among the major changes that I have seen in my time is the way people look at things that have aged. No, I don’t just mean men and women – but even material things. We live in an age of fast food and disposable goods. However, I have an obsession with old stuff and don’t part with it easily. I belong to an era that valued things and felt bad when one outgrew them or when they decayed.

I was obsessed with shaving razors. In the 60s, the razors were very typical – they would have two detachable parts – the one on the top accommodated a blade, and was then screwed into a small holder. Like everyone else, even I possessed one of these as I went from school to college.

While in college, one of my sister’s friends, Savita Palriwala, presented me a Gillette Razor. Savita, a resident of Boston in the US, always brought gifts for us whenever she returned after a vacation. In 1973, she presented me with a Gillette twin cartridge razor. Nowadays, we live in the age of Gillette and throwaway razors –and we find them even in small village provisional stores!! But not in those days. To be seen with a Gillette Razor was a big statement.

Savita presented me a top class razor! You want proof of it? Well, I have used it every single day and it is still as young as it was in 1973! It has not aged with me!

But, I have had problems with it. Who would not, if one has lived with something for nearly 40 years. I have misplaced it several times – but always managed to find it! I have never lost it. But, one day, a very strange thing happened, when I gave it up as lost.

We went to Europe on a holiday and, as usual, I packed my shaving kit very meticulously. On our way from Prague to Istanbul, I put my razor into my shaving kit and then in the front pocket of my travelling bag. We reached Istanbul early morning and then made our journey onwards to Ankara where my sister resided. Once home, I searched for my razor and found it missing. I searched my entire bag, removed each and every article from it and still could not find it.

I was edgy and panicked – I had lost something that had been with me for 35 years. I shared my helplessness with Sangeeta and my sister Kusum.

My sister gave the standard reply, “Arrey don’t worry, here take this new one. I always keep a spare one. Do you want a toothbrush too?”

“Kusum, it is not about a replacement. It’s about losing something that has been with me for 35 years. It’s like losing a part of myself,” I said, trying hard to hold back my tears as I bent over my travelling bag.

“Don’t be silly. Don’t get sentimental about these things. Where do you think you could have left it?”she asked as she re-checked my bag.

“Prague. But I am sure I put it into this pocket,” I said –pointing to the front pocket of my bag.

I phoned up the Denisa Hotel in Prague, where we had stayed. The Czech lady told me get back after 15 minutes. In the meanwhile, she would check the room. I phoned her after 15 minutes and was told very curtly that there was no razor in the room and that even if they had found it they would have put it into a wastepaper bin.

“Can you please…”, I started. But she had no time for me and hung up.

I could not sleep. I checked and rechecked my bag every time I opened it. But to no avail. I felt terrible and cursed myself for being so careless.

“I don’t know where it could have gone. I definitely remember putting it in,” I told Sangeeta and Kusum, both of whom also thoroughly rechecked my bags.

“You are getting old. Accept the fact,” my sister laughed and continued, “And what’s the big deal. In 35 years, you should have changed razors at least 35 times. You are behaving as if it is your wife who is lost!”

I flew back to Delhi and slept. I got up and, as a matter of routine, opened my bag. And guess what? Yes, I found my razor! You can’t imagine how happy I was. It was like reuniting with a lover who I had given up as dead. I ran out shouting, “I have found it, I have found it,” much like Archimedes, shouting “Eureka, Eureka.”

Yes – my Gillette razor is more than just a razor. It’s been a part of 47 years of my life. Every single day!

I hope it will go into the funeral pyre with me when the time comes. Because, like the Ancient Egyptians, I too believe that a dead man must carry the essential remains along with him.

I may go to Heaven or Hell and my razor will go with me!
Because I need it every day – first thing in the morning!

(Kulbhushan Kain is an award winning educationist with more than 4 decades of working in schools in India and abroad. He is a prolific writer who loves cricket, travelling and cooking. He can be reached at
kulbhushan.kain@gmail.com)