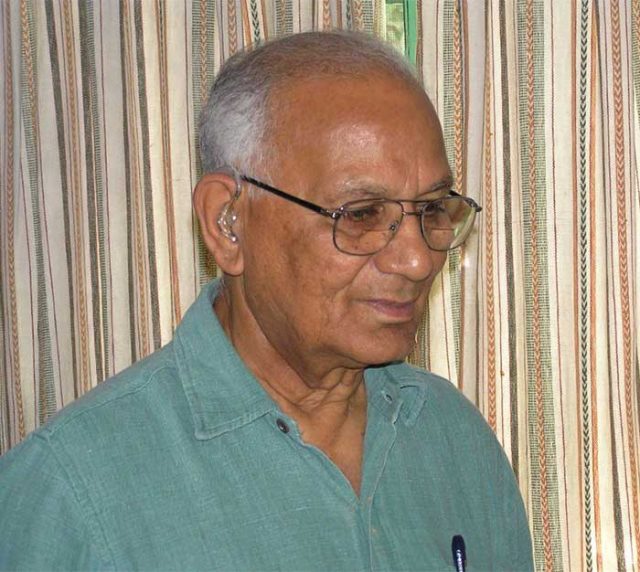 Nalni Dhar Jayal, a former bureaucrat, died at his Vasant Vihar residence here on 18 March. Only four weeks ago, his 93rd birthday was celebrated. He had served with much distinction in the Frontier Administrative Service and, later, in the Indian Administrative Service. His multifaceted persona defied any rigid definition. His interests were wide ranging, which he pursued with much passion. He was a man of great vision and went through life with much grace and unfaltering idealism.

His life story began with his birth in the mountains of Almora during a severe snowstorm, as he often liked to tell people. His early schooling and love for nature were the seminal influences that he had absorbed during his years at the Doon School. It was also there at the school that his love for music and mountaineering grew, thanks to the influence of his teachers, friends and cousin Nandu Jayal, who was a legendary mountaineer.

Ecologist Sathis Nair, his close partner in the battle to save the ‘Silent Valley’, described the hills of Tehri Garhwal as Nalni’s ‘cradle’. Growing up amidst the mountains had inculcated in him values and attitudes that could be described as ‘ecologically ideal living’. In some ways, his love of mountains, forests and alpine meadows in his native Garhwal had virtually turned him into an ‘environmental philosopher’.

Despite the absence of any guiding direction during his growing up years, there was some destiny or fate that influenced his career choices. He joined the Indian Air Force in 1946 and there, too, fate presented him with an opportunity to achieve an historic and unique feat by being part of the team that flew over the Everest in 1953 and produced the first views of the great mountain range never seen before. That later featured on India’s postage stamps.

Giving up his flying career, Nalni joined the fledgling Indian Frontier Administrative Service started in 1955; it was nurtured by Dr Verrier Elwin, the eminent philosopher- anthropologist, and later by his wife’s uncle, Dr Salim Ali, the ornithologist. He first served for five years in the North-East Frontier Agency (NEFA), when he was inducted into the Indian Administrative Service. One of his most outstanding jobs was as the Deputy Commissioner of the tribal district of Kinnaur in Himachal Pradesh, where he served with distinction for seven long years.

In 1980, Nalni was given the rare opportunity of setting up a new Department of Environment by Indira Gandhi’s government. Nothing could have been closer to Nalni’s heart than to innovate the concept of environmental protection and affirmative action that stretched from the Himalayan heights down to the unique reefs of the Andaman & Nicobar Islands. He was a man whom the new age conservationists respected. He had also set up several scientific institutions for studies and research in wildlife and environmental conservation that put India on the IUCN Map as a member of the team that later drafted the World Conservation Strategy in 1972. To quote Dr. Nair again, “…….it is not possible to pick out individual events to attribute to him. Nalni simply never looked up or looked back; he kept his shoulders firmly on to the wheel and pushed with all his might to keep the cart going. It would be a simple honest statement if one is to say that between the late 1960s and until the 1990s, there may not be many others like Nalni within the government machinery who did so much for nature conservation and that too silently and against such odds.”