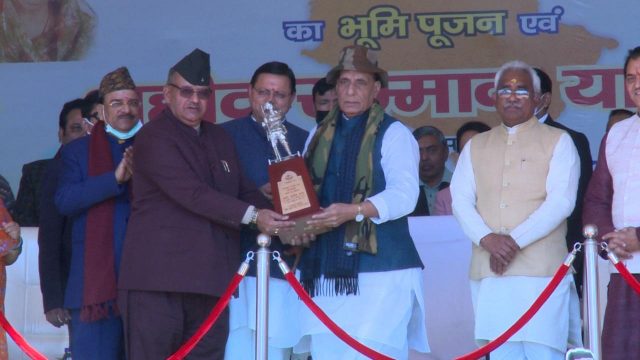 Dehradun, 15 Dec: Defence Minister Rajnath Singh said today that some powers were trying their best to create a rift between India and Nepal but they would not be allowed to succeed. He was addressing the gathering today on the occasion of the Bhoomi Pujan of Sainik Dham to be built in Dehradun.
He also said that, in 1971, exactly fifty years ago, the Pakistani Army was forced to surrender before the Indian Army. He added that throughout history, India never attacked anyone or eyed any other country’s territory, but it knew how to give a befitting response to those who dared to challenge it. He declared that India is well on the way to becoming self-reliant in defence production. Earlier, 65 percent of defence equipment was imported, but India is now exporting defence equipment to 72 countries. The Indian Armed Forces now stood with full capability on every front. India is emerging as a strong and powerful force in the world.
Singh also lavished praise on Chief Minister Pushkar Singh Dhami and said that, earlier, he had praised Dhami’s ‘batting’, but now he wanted to add that Dhami is also a very effective bowler. Under his leadership, Uttarakhand has seen development projects gathering pace and a large number of pro-people decisions taken and being implemented. He is an all-rounder in the field of development. Large scale development work has been done. Under his leadership, Uttarakhand would become a leading state in every field by 2024.
Defence Minister Rajnath Singh and Chief Minister Pushkar Singh Dhami performed Bhoomi Pujan today for the grand Sainik Dham to be built at a cost of about Rs 63 crores in Guniyal village here. The ‘Shaheed Samman Yatra’ also concluded on this occasion. Sacred soil brought from the courtyard of each martyr’s family in the state was poured into an urn by Defence Minister Rajnath Singh and Chief Minister Pushkar Singh Dhami at the time of the Bhoomi Pujan. On this occasion, the families of the brave martyrs were also felicitated by the two leaders by giving them Shaurya Samman Patras.
Singh, while paying homage to the martyrs, said that it was India’s cultural tradition that those who laid down their lives for the country were considered godlike. Uttarakhand was Dev Bhoomi, Tapobhoomi, and the land of valour. It was therefore appropriate that, as per the dream of Prime Minister Narendra Modi, the fifth Dham – Sainik Dham – is being built in Uttarakhand. The sacred soil from the courtyards of the martyred soldiers had been brought to the Sainik Dham.
He reminded that Uttarakhand was created a separate state by then Prime Minister, Atal Bihari Vajpayee. The Defence Minister said that martyrs of India never hesitated or feared for their lives while protecting the pride of the country. Singh said that whoever would come to this military dham would take inspiration from the saga of the martyrs.
Describing Uttarakhand as the land of heroes, he condoled the death of CDS General Bipin Rawat. The passing of General Bipin Rawat in this way was a great loss for India, he stressed.
Singh appreciated that Prime Minister Narendra Modi had ensured the grand reconstruction of Kedar Puri. India is being reunited with its cultural roots under the leadership of the Prime Minister, he asserted. Every effort is being made by the Central Government to solve the problems of soldiers, ex-servicemen and their families.
The Defence Minister also reminded that Prime Minister Narendra Modi solved the one rank one pension issue of ex-servicemen that had been pending for decades. Every effort had been made by the government for resolution of the problems of soldiers and their families. Continuous efforts had been made by the government to solve every problem of the ex-servicemen too. Whatever ought to be done for the honour of the soldiers, the government was always willing to do.
Singh asserted that road, rail and air connectivity had expanded rapidly in Uttarakhand. The Dharchula- Lipulekh-Mansarovar road link had been made functional. This route was very important from the cultural point of view.
Rajnath Singh and Pushkar Singh Dhami also paid tribute on receiving information about the death of Group Captain Varun Singh. Two minutes silence was also observed in his honour. Group Captain Varun Singh was severely injured in the chopper crash in Tamil Nadu that led to death of General Bipin Rawat and others. Singh was the lone survivor but today he too succumbed to his injuries in a Bangalore hospital.
Dhami remembered General Bipin Rawat and said that he was dedicated to the country till his last breath. General Rawat had some dreams about Uttarakhand, which the state government would certainly fulfil. The Chief Minister said that the prestige of the country’s armed forces had increased under the leadership of Prime Minister Narendra Modi and Defence Minister Rajnath Singh. The brave soldiers had been given full freedom to respond to the enemies. The State Government was constructing the Sainik Dham total commitment. Sacred soil had been brought from the homes of 1734 martyrs. The grand military dham would inspire the youth to serve the nation. The honour of brave soldiers was the most important thing for his government. The Chief Minister added that, being a soldier’s son, he knew very well the pain and suffering of the military families.
Assembly Speaker Prem Chand Aggarwal, State BJP President Madan Kaushik, MP Mala Rajya Laxmi Shah, former Chief Minister Trivendra Singh Rawat, MLAs Munna Singh Chauhan, Vinod Chamoli, Sahdev Pundir, Pradeep Batra and Khajan Das, District Panchayat President Madhu Chauhan and Mayor Sunil Uniyal ‘Gama’ were among those present on the occasion.