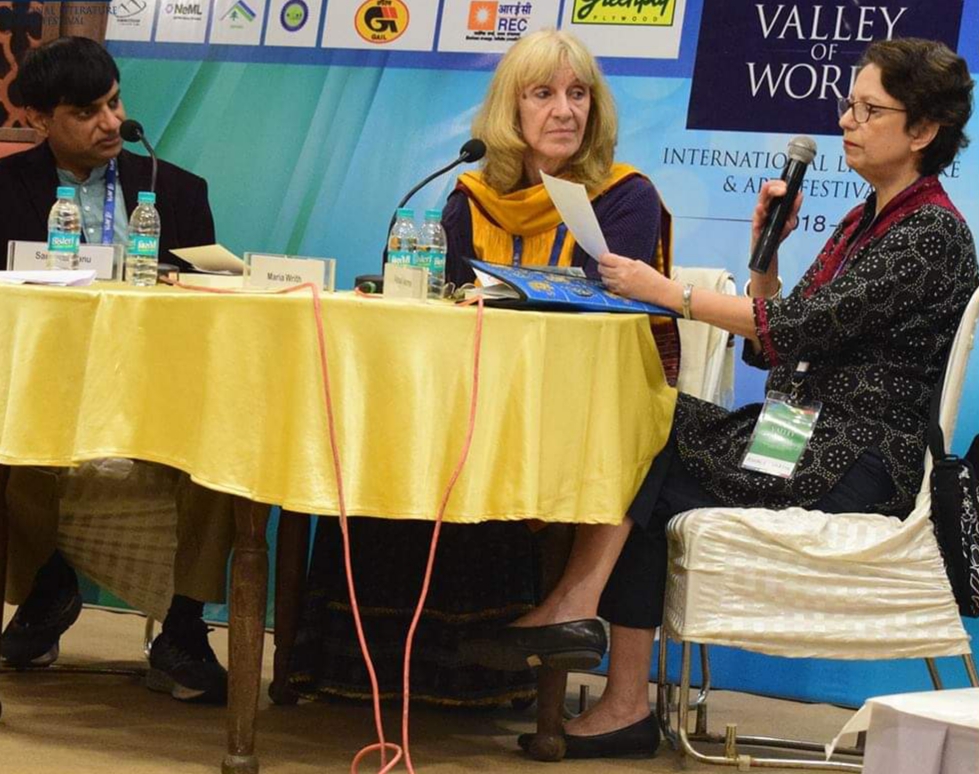 Dehradun, 25 Nov: Speaking on the occasion of the launch of her book, ‘Thank You India’, on the concluding day of Valley of Words Literature & Arts Festival here, today, writer Maria Wirth said that India had much more to offer to India by way of wisdom and its profound knowledge. However, there were forces in the West that did not want the world to know the profound knowledge that India had to offer. She added it was a matter of grave concern for her that even Indians were not generally aware of their great heritage and the treasure that India had, mostly written in Sanskrit. When she first came to India, for long she was convinced that every Indian knew and treasured the wonderful heritage India had. However, much later, when she realised that this was not the case, she noticed that there had been a concerted effort to prevent even Indians from knowing how valuable the ancient Indian heritage was. In fact, there was a concerted effort by so many forces in the West to paint India in a poor and negative manner because they were scared of India’s profound knowledge.

She also cited a recent incident when the CEO of a social media platform participated in a protest against Brahmanism in Delhi, where the claim was made that Brahmanism was against rationality, even though the Vedas and an innumerable number of Sanskrit texts based on rationality were written by the Brahmins.  It was mischievous to vilify the Brahmins and a sort of deliberate manipulation.

Describing her experience of living for thirty years in India, she said she was highly indebted to the country.  A German by birth, she did not actually come to India as a seeker as many Westerners usually did. She came here on a stopover while en route to Australia after completing her psychology studies from Hamburg University. She added that she grew up a Christian and as a child did believe in God as described by Christianity and was led to believe that she would go to hell if she did not believe in this God. However, later she stopped believing in God as described in Christian doctrines, though she always believed in the presence of the divine force within every being.  It was in India and after meeting many Gurus across the country that she started to realise that there was God in every living being and was everywhere, not just in the sky (heaven) in the form of one and the same energy. She added that this insight had been provided by the ancient Indian Rishis who stated that this energy was conscious, alive. They called it Brahman or Paramatman or simply Tat. In English, it was usually called “God”.

The book launch session was chaired by Ashali Verma, while the publisher of the book, Sankrant Sanu also participated. Verma questioned the claims made by Maria Wirth about the superiority of Hinduism over other religions and asked why Maria believed so when many Indians or Hindus themselves believed all religions to be equal. Maria said that because she really believed so and also because, while other religions instilled fear in followers and forced them to believe that theirs was the only truth and if they did not believe in that truth, they would rot eternally in hell, Sanatana Dharma never taught this. In fact, the Hinduism encouraged every seeker to personally seek and discover the truth. That was why she believed in the superiority of Hindu Dharma. One ought not to run away from the truth, she asserted.

In response to another question, she claimed that Max Muller, despite being a German, had been employed by the East India Company and the British to translate Indian texts into English in order to “show to the world how insignificant Indian texts were in comparison to Western literature” and he committed a blunder by claiming Aryan invasion of India, the belief which had divided India and damaged the Indian ethos. Aryas belonged to India and they did not come from anywhere else. She claimed that the theory was now getting exposed and busted. She added that Arya was a Sanskrit word which never referred to any race but to persons, while the Western use of the word Aryan was in reference to a race. The two words were not related to each other at all.

Maria also blamed the Macaulay system of education for lack of knowledge about their wonderful heritage among the Indians and stated that he had cut off Indians from their roots.  She added that, while on a tour to a German University, she was shown some palm leaf manuscripts in Sanskrit from India and was told that at least 36 such Indian manuscripts were in the possession of German universities while many more were in London. So, India had lost many of its treasures for ever. She added that she had curiously come across some scientists in Germany who told her about the scientific content in some of the manuscripts. She added that India had great responsibility to teach wisdom to the rest of the world based on its ancient treasure of knowledge.

Sanu felt that, apart from Macaulay, Indians themselves were also responsible for their lack of knowledge about the value of Indian scriptures and knowledge system.  Sanu is an IIT professional who has been living in Seattle (US) for the past 30 years, but is now also diversifying into publication.