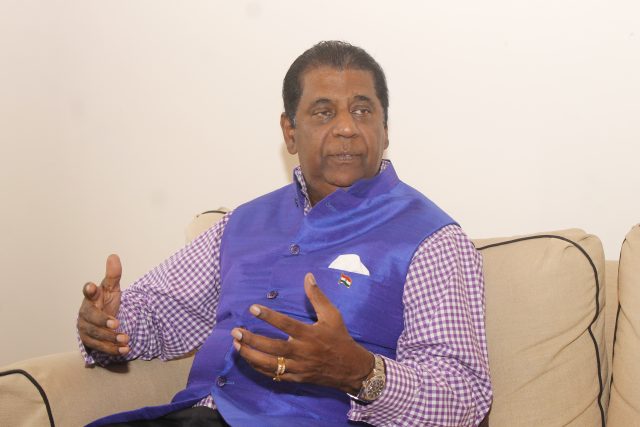 DEHRADUN, 19 Oct: Vijay Amritraj is not just a tennis legend but has made a name for himself and the country in several diverse fields. He has been undoubtedly the most successful singles player in Indian tennis history reaching quarter finals twice in the Wimbledon as well as twice in the US Open. He has taken India to the finals of Davis Cup twice during his playing days, though India has since long been relegated from the World Group. He had achieved his highest ATP ranking of 16 in 1980, which was amongst his most successful years in tennis. He remains the player with highest number of singles titles among the Asians, with 16 ATP titles to his credit. He has led a quite extraordinary life all these years and besides being a tennis legend, he is a leading tennis commentator for some global sports channels, a film actor, a film producer, a TV host, UN Brand Ambassador for Peace and a social activist. As a player, he was among the most liked players on the tennis circuit and for this reason, was also elected ATP Chairperson, a post he held for several years. Most notable of his films as an actor include Roger Moore starrer James Bond Film ‘Octopussy’ where he played a MI agent Vijay, Star Trek – 4 (The Voyage Home), Nine Deaths of Ninja and Of Gods and Kings. He also acted in some American TV serials including The Last Precinct and What a Comedy. He has been hosting a very popular TV show Dimensions for CNN- IBVN where he has interviewed other legends from diverse fields. Now he runs a film production company called First Serve Entertainment along with his son Prakash Amritraj who too has been a very notable tennis player having played Davis Cup for India for more than 7 years. Amritraj also set up Vijay Amritraj Foundation in 2006 for charity and other social activities. In Doon to interact with the Doon School Boys as chief guest for the Doon School’s Annual Function, he spoke at length to Garhwal Post and dwelt on various issues related to sports and other topics.

Western players are generally very tall and physically much stronger and the way, the game has changed, it has become much more physical and aggressive. Indian players were predominantly good grass court players with their serve and volley game. You too were a great serve and volley player. Do you agree that relatively weaker physical structure and height has proved to be some kind of hindrance for Indian tennis players at the international level?

Great Question! Obviously, true for Asian players. However, if you look at the current generation of our boys like Yuki Bhambri, Saket, Ram Kumar or Prajnesh, all of them are big boys physically. So, if they work harder, they can achieve much more. Prajnesh had a good run this year, Sumit (Nagpal) played well. They need to jump to the next level now. If they are able to break into the top hundred and then top fifty, they can have good run. India needs to produce players who can break into top hundred and top fifty category and then take India back to the World Group in Davis Cup. Unless we have two to three players in top fifty category, it will be very difficult to form a core group and a lasting impression as a country in the international tennis arena.

You have been ATP President for some years. These days several top players including Rafael Nadal, Roger Federer and Novak Djokovic have been complaining of too many matches and too tight a tennis schedule. Is their complaint justified in your opinion?

Well, some top players do complain about the tennis calendar. However, I must add that players like Rafa, Roger or Djokovic are at the stage of their career where they skip a large number of tournaments and play tournaments of their choice. So, they should have no issue with the schedule when nobody is forcing them to play all or certain tournaments. In fact they have the luxury to choose which tournaments to play and which ones to avoid. A busy calendar is otherwise good for tennis. A busy calendar provided other players an opportunity to come up the ranking.

The old guard is being pushed hard by the new players. However, obviously, Roger, Rafa and Novak have been able to train harder, keep fitter and manage their schedules much more sensibly and for this they still continue to improve their games and continue to win major tournaments. However, change is bound to happen and I see Daniil Madvedev, Zverev, Tsitsipas, Rubalev and Shapalov are pushing hard and have had great season.

Having been a legendry player yourself, you have played a significant role in popularising tennis in India and in bringing international tennis to India. What is the current scenario in Indian tennis in your opinion?

Well, as far as junior players of age 14 or under are concerned, I see lot of promising players. Recently, we had organised an event called Road to Wimbledon in New Delhi, sponsored by the Rolex in order to grant some promising kids, opportunity to visit Wimbledon and play there. Wimbledon looked so far for us, when we were kids. There is lot of hope and promise as far as junior players are concerned. However, in the seniors’ category, we still have to prove ourselves.

During your playing days, India was almost always in the World Group in Davis Cup and if at all relegated to regional group, it used to bounce back. In fact, India reached the Davis Cup Finals twice under your stewardship. Any possibilities of repeating the feat?

Frankly, it seems a very distant dream at the moment. Indian players need to break into top fifty, if India is to repeat its past achievements in the Davis Cup. We need to focus on how to get back into the World Group in tennis.

So, why countries like in India can’t have more tournaments as part of the international calendar? Don’t you agree that India ought to have more venues for tennis tournaments! Yes for sure! Currently we have only Chennai or Bangalore, Chandigarh and Pune and Delhi. India could do with more places and even multipurpose facilities with tennis as one of the sports. Do we need also more satellite tournaments like Futures and ITF?

No, I think, we have enough of them already. The kids and youngsters now can earn same amount of points in order to be ranked and even improve their ranking without having to go to Europe as we had to when we were emerging as players. They have to spend much less money as there are opportunities to play here and earn points. The tour events that they have had, the Challengers and the Futures tournaments we have had in India in the last 10 years, we have had an incredible amount of opportunities for the players. I don’t think there is lack of opportunities.

As the most successful Asian player with most number of singles titles, you can look back at your tennis career with lot of satisfaction. You were responsible of depriving the great Bjon Borg of winning US Open and were on the verge of defeating him once at Wimbledon too. However, you also suffered from injuries and you once stated that it takes a lot of time for you to leave the bed after the sleep because of the injuries you had incurred while playing. Do you think, injuries affected your career to some extent?

To some extent, yes, it did affect my game. And, it still takes time for me to leave the bed every morning. I can’t stand for long hours or travel in car for long hours even now due to those injuries. However, when you are young, you assume yourself to be Tarzan. When playing, you just pop up pain killers and go out and play. However, at this age, one realises that those thing catch up with oneself.

What was the best phase in Indian tennis in your opinion?

The 70s and 80s, no questions about that. I led India to two Davis Cup Finals. If we look back in time, then that was the best time for Indian tennis.

You had a good exposure as an actor and a film producer in Hollywood. You still produce films but do you ever dream of directing a film?

Interesting question! Yes, I do dream of directing some films, it is a great craft. Let us see how it works out. It will be an interesting task. However, the director is the CEO of the film but he too leads a team. A good direction can be spoilt totally by bad editing. So if a good team is formed, why not, I will like to direct a film one day!