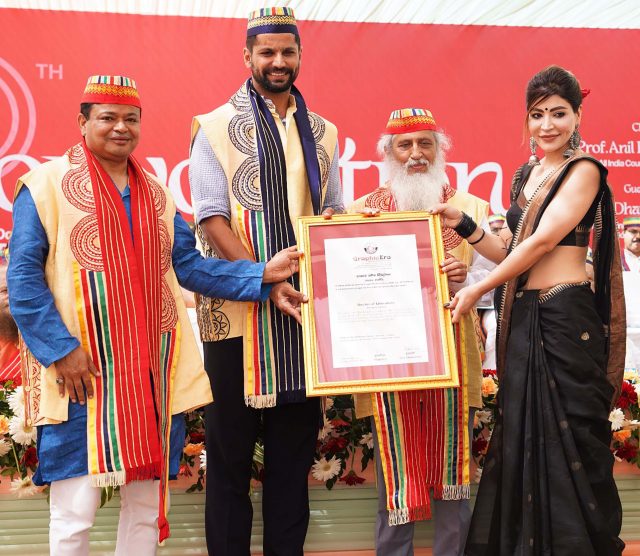 Dehradun, 10 Oct: Dr Anil D Sahastrabuddhe, the Chairman of AICTE, called upon the youth to become self-reliant and contribute to preserving the cultural heritage of the country. He was speaking as the Chief Guest at the 10th Convocation of Graphic Era deemed University, here, today. Olympian hockey player Rupinder Pal Singh, star badminton player Saina Nehwal, Parmarth Niketan’s Swami Chidanand and forestry specialist Dr JP Chandra were conferred honorary doctorates on the occasion. During the ceremony, 5317 students received their degree.

Dr Sahastrabuddhe, while addressing youths who received PhD, Engineering, Management and Science degrees, said that Graphic Era has selected eminent persons associated with spirituality, sports and science for the honorary degrees.
He appreciated the fact that 61 girls were among the 99 students awarded gold medals at the convocation. 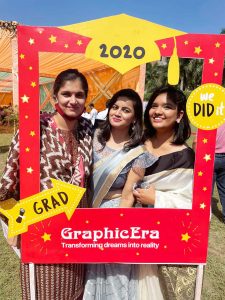 Dr Sahastrabuddhe recalled that, in India, the concept of Vasudev Kutumbhakam for thousands of years. The New Education Policy was based on this principle. On completion of one year of the new education policy, PM Modi reviewed its progress and emphasised that it should be multidisciplinary. Many subjects could be taught simultaneously, such as music and maths, or all-round development of the students. The Chief Guest appreciated that Graphic Era is running such multidisciplinary courses. He said that it is not ‘Dikshant’ but ‘Diksha’, the initiation of real life. After this, the youth would face the reality of society. If each student contributes to the alma mater, it will be considered guru dakshina. He asked them to always remember the hardships undertaken by their parents for their education, their duty towards the teacher and society.
He described the founder of Graphic Era University, Prof (Dr) Kamal Ghanshala as a role model.
Dr Kamal Ghanshala said that the mission of the university, ‘Transforming Dreams into Reality’, began 28 years ago. Referring to the selection of alumni in the Army, Navy, Air Force, ISRO, Google, Adobe, etc., he said that even youth from the villages had become eminently employable people by taking advantage of the facilities at Graphic Era. He asked the students to dream big.
Superstar badminton player Saina Nehwal and veteran Indian hockey team player Rupinder Pal Singh were given the honorary degrees of DLitt. Swami Chidanand Saraswati, the founder president of Parmarth Niketan, and Dr Jyoti Chandrakar, received honorary Doctorates in Science. Swami Chidanand Saraswati said that life becomes the way one wants it. He said that, today, there is need to connect the internet to the inner net. Communication, Connection and Compassion were very important in life.
Rupinder Pal Singh said that one should always aim big. Saina Nehwal thanked the Graphic Era Educational Group for providing her with this honorary degree by sending a letter from Denmark. On her behalf, Senior Office Bearer Rakhee Ghanshala received her degree.
Dr JP Chandra suggested the youth join the private sector in order to have the freedom to work.
Vice Chancellor, Graphic Era University, Dr Rakesh Kumar Sharma highlighted the achievements of the university and conducted the oath ceremony for the new degree holders. Chancellor, Graphic Era University, Dr R C Joshi said that the degree holders were the ambassadors of the university.
As many as 5317 pass out students from the years 2019, 2020 and 2021 were conferred degrees. Also 99 students got gold medals, 98 students got silver medals and 91 students got bronze medals. Thirty-two researchers were conferred doctoral degrees for completion of their research work. The event was convened by Dr M P Singh.

Garhwal Post has established itself as a credible, balanced and forward looking newspaper in India. Based in Uttarakhand, the daily is read by the aware, socially and culturally responsible, high-income elite of society.
Contact us: info@garhwalpost.in
best dating apps for celebrities