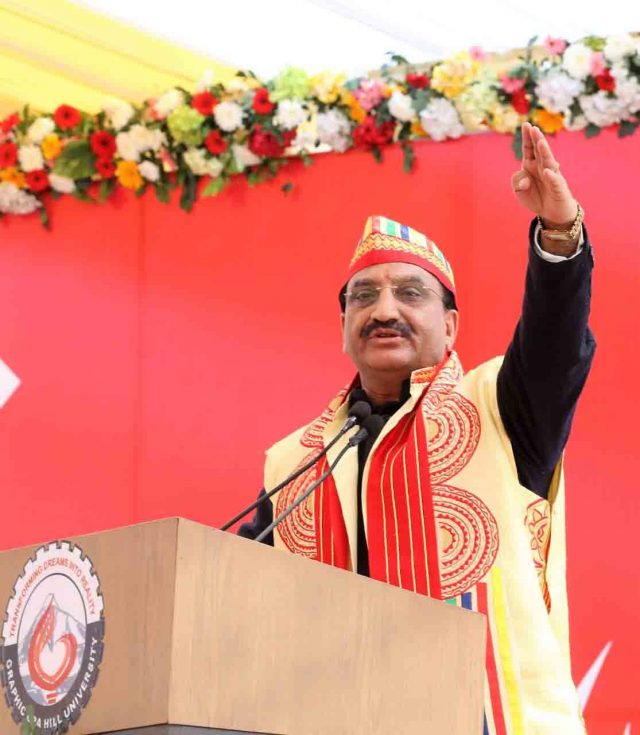 DEHRADUN, 8 Mar: Western countries address the world as a market, but we address the world as a family. These lines said by Dr. Ramesh Pokhriyal ‘Nishank’ underlined that India has emerged as an empowered economy with ample employment opportunities that can cater not only to Indians, but the outsiders as well. These words were spoken by Dr. Nishank on the occasion of the second convocation ceremony of Graphic Era Hill university as chief guest. In this ceremony Dr. Nishank felicitated 69 Gold medalists belonging to different fields of study. 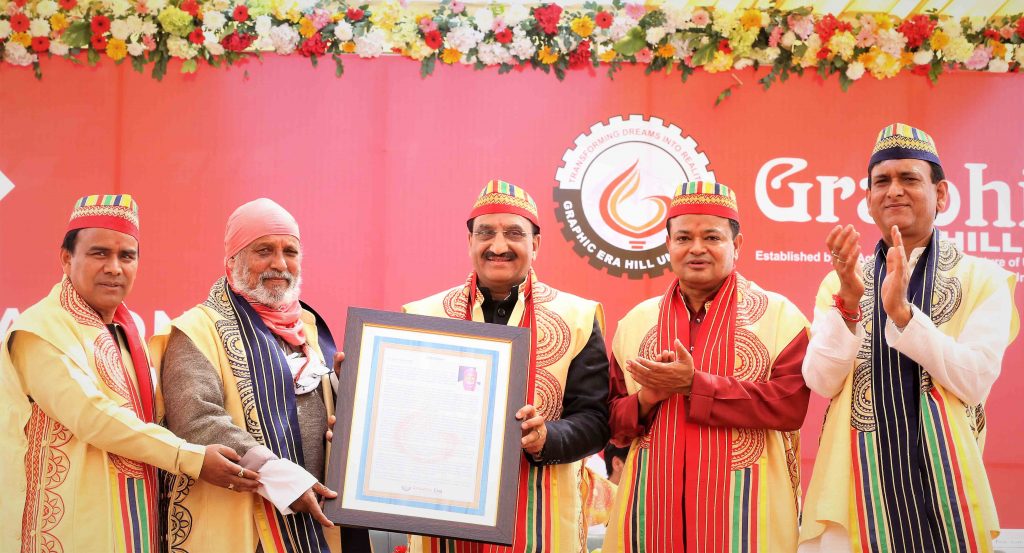 During the ceremony the university also felicitated renowned environmentalist Dr. Anil Joshi.
While addressing the gathering Dr. Nishank said that the real achievement is to bring about transformation in society at a larger level beyond personal goals.
He added that youth should have faith in their selves and lead the victory path. He also said that dreams should become an inspiration and act as a catalyst to achieve goals. And full dedication and hard work is required in order to fulfill these dreams.
Dr. Nishak said that at the national level Graphic Era in education is doing an excellent job. Dr. Nishank said that with the establishment of the Graphic Era Hill University the students from hill regions have gained much importance in the field of education. He added that Graphic Era, by providing education has contained migration. He praised the President of Graphic Era, Group Prof. (Dr.) Kamal Ghanshala whose dream manifested to help scores of students get quality education.
He added that Graphic Era has established itself among the premier national and international institutions and it is heading towards world ranking. In the convocation ceremony 4753 degrees were awarded to students, wherein 69 students were awarded gold medals, 73 were awarded silver medals, and 72 were awarded bronze medals.
Higher Education Minister Dr. Dhan Singh Rawat said that the Prime Minister after the 4 dhams stated about fifth dham as Sainik Dham and now in the state sixth dham will be established as education dham. Dr. Rawat said that soon first Atal Academy will be established in the state where poor children will be given free IAS exam training. By 2022 Uttarakhand will be the highest IAS producing state. He said that even ban of mobile phones in classrooms is being thought about. According to the survey maximum students are in this ban.
Chancellor Graphic Era Hill University Prof. (Dr.) Kamal Ghanshala elaborated on the achievements of the hill university. He mentioned that the first batch of students got placed with multinational companies such as Infosys and Wipro. The trend of high packages and placement is continuing with the university. Dr. Ghanshala said that the ones who are receiving degrees today, will be carving their place as professionals in coming three years in America, Britain and Canada. Stressing on the message given by the Prime minister he said that youngsters instead of seeking jobs should be job creators. Senior member Graphic Era management board Rakhi Ghanshala presented the vote of thanks.