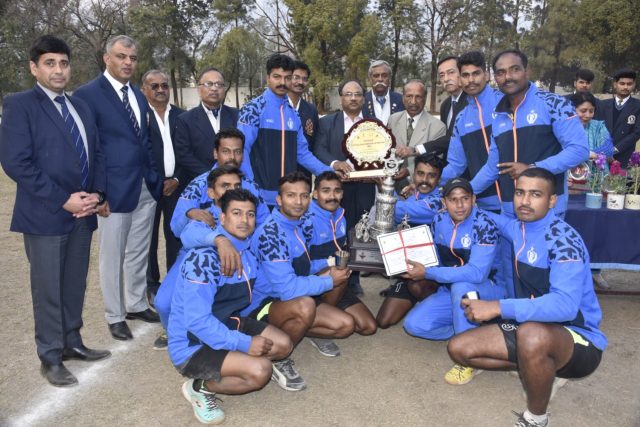 DEHRADUN, 20 Feb: History was created today as the most prized team of the Air Force had to taste the sourness of defeat at the hands of their arch rivals in the field, The Indian Army.

The Chief Guest Vipul Kumar, CGGM, ONGC in his speech exhorted the young budding Cycle Polo players to excel in this game. He said that this sport is a combination of stamina and sprit and teaches a lot of positive things about life, such as how to remain fit, how to excel and how to go beyond limits.

The day began with the scintillating second semi final between the spirited Indian Army and motivated Chattisgarh Team. As expected it was well fought match and the game saw many thrilling moments, with the pendulum shifting from one side to the other, but the composer, skill and perseverance of the Indian Army team gave them a edge over their rivals  and helped them defeat them with a solitary goal ensuring their place in the finals.

In the second match of the day, played for the third position between Territorial Army and Chattishgarh, the Territorial Army regained their form and came out well from the defeat in the semi finals by trouncing Chattisgarh 17-12.

The finals as expected was a cliffhanger that kept all the spectators on the edge of their seats as most of the expectation was from the Indian Air Force Team as this was the only unbeaten team in the tournament. The first quarter was started by both the teams with full zeal and energy with each contesting hard for every goal. The players even though having injuries focussed on their mission and vision and never looked eluded. At the culmination of the first quarter Indian Army Team went out of the field well contented as the score was 5-3 in their favor. The second quarter again was a personification of speed, strength and strategy but once again the exuberant Indian Army Team sensing victory enhanced their pursuit more vigorously and never let the Air Force to take over. In the third quarter Air Force Team came from the back and were able to equalize the score, and from here the battle of wits began.

The final decisive quarter was beyond any human imagination in terms of temper, speed, enthusiasm, perseverance and strategically planned by both the teams. But the Indian Army’s never say die attitude stood them in good stead. The Indian Air Force Team too put up its best with  faith in their skill and talent.

The veterans also felicitated the members of Indian Squad of Cycle Polo and the tournament culminated with the lowering of the CPFI flag.