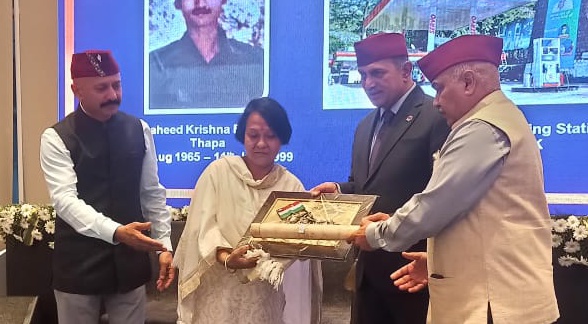 Dehradun, 11 May: Shrikant Madhav Vaidya, Chairman, Indian Oil Corporation Limited, felicitated the martyrs’ families of Operation Vijay at a felicitation function held, here, on Tuesday.
Vaidya met and interacted with the families of Kargil War Heroes, who have been awarded Petrol pumps and LPG distributorships in Uttarakhand and UP West by Indian Oil as a tribute to the supreme sacrifice done in the service of the Nation during the Operation Vijay. Major General Sanjeev Khatri, GOC, Sub Area, Dehradun, was the Guest of Honour at the event.
Paying homage to the Martyrs, Vaidya lit the ceremonial lamp at the ‘Wall of Remembrance’ – a wall depicting photographs of the War Heroes – in the presence of their family members, Rajkumar Dubey, Executive Director & State Head, Indian Oil, Uttar Pradesh State Office-II, Ajay Garg, CGM (RS), UPSO II, and senior officers of Indian Armed Forces and Indian Oil.
During his address, the Chairman lauded the sacrifice of the Indian Armed Forces during the Kargil War and also highlighted the relentless efforts undertaken by Indian Oil in providing rehabilitation to the families of Martyrs. He disclosed that Indian Oil is dedicated to serving the Nation with the belief ‘Pehle Indian Phir Oil’ which is evident from the efforts taken by Indian Oil to ensure a source of livelihood to the families of the War Heroes.
Major General Khatri lauded the efforts of Indian Oil during the Kargil War and appreciated the efforts undertaken by it in supporting the families of the martyrs
Vaidya also presented the new age Composite LPG Cylinders to veterans of the Indian Armed Forces who were present at the event.

Garhwal Post has established itself as a credible, balanced and forward looking newspaper in India. Based in Uttarakhand, the daily is read by the aware, socially and culturally responsible, high-income elite of society.
Contact us: info@garhwalpost.in
dating as a single mom dating round rock